The goal of this project is to use the motor to tell a story. I made a “hungry dragon”, so my dragon would move faster in response to a stimulation (chasing a cat, food placed in front, etc). Movement is shown through rapid rotation of the CAM systems, creating the undulating motion of the dragon’s body.

The stepper motor would turn the dowel with the CAMs, and the speed of the rotation can be varied by a potentiometer. However, there were a few challenges: the motor spins too quickly, the CAMs themselves are too large for the frame made, and decorations could not be completed to satisfaction. 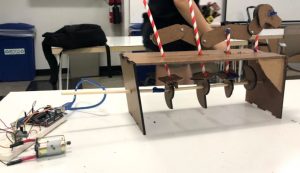 To solve these issues, I can cut smaller CAMs, use off-center CAMs rather than snail or tear CAMs, use longer screws, and make the frame smaller. Some parts of my dragon (or sausage links) have to be stationary to create the undulating motion. To make sure the motion works, I could learn to run a SW animation or do a cardboard prototype. To cut better pieces, I can become more familiarized with bitmaps in lasercutting.

In the future, I also want the stimulation to be more in line with the context (the hungry dragon), rather than having a random potentiometer.