For my project I wanted to incorporate text to speech in physical computing in order give the ability of speech through typing.

After looking online I believed I could use an old ps/2 port keyboard to work with the Arduino by soldering wires to the correct pins and then using a library to get the key presses in my code. After a lot of struggling with getting the connection between the pins and wires, I decided to order the piece that will make this connection much easier, by plugging into the port and giving the output wires that go into the Arduino. This part hasn’t arrived yet so for this stage of the assignment I used the Serial input from the computer’s keyboard in order to show my idea. 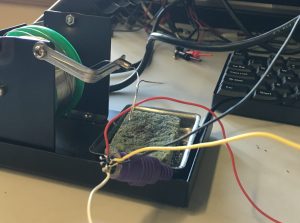 ^when I realized that this was probably not going to work

I found two text to speech libraries online for the Arduino, and incorporated both into my current project. The first library has the ability to take any string and will attempt to make the speaker speak it. It also has an adjustable pitch which I gave access to via buttons. To be honest, the outcome of this was a little disappointing. You can sort of tell what is being said, but its pretty hard to understand.

The second library I found had a bunch of pre-made words that it could say if initially written to memory. I use this library by having the speaker read the letters out that were typed. You can switch between these two modes with the switch on my breadboard.

Currently, the volume is too low and I need to use an audio amplifier/bigger speaker to so that this will be audible in a noisy environment.

Once the ps/2 port that I ordered shows up, I will hopefully be able to interface with the ps/2 keyboard so that I don’t need to use the keyboard that the arduino is plugged into via USB. This will be nice because my final vision for this project is to not have it be plugged into a computer but standalone box with a keyboard and speaker and everything else tucked inside, including a power supply.