Precarious was created for the National Portrait Gallery exhibition Black Out: Silhouettes Then and Now, which opened in May, 2018. 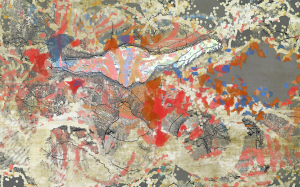 This is a screen shot of the project, which tracks and visualizes silhouettes of people as they move through the museum. What’s different about this, though, is that the camera looks down on figures and tracks them from above. ( you can see in this screen shot, someone has figured this out and spread their arms wide.) The project is meant to show boundaries and how people push them and track over them. Camille Utterback works in installation art, meant to be interacitve and create dialogue about physicality. Utterback combines various sensing and display technologies with the custom software she writes. I like her work and this project specifically because bodies and patterns are really interesting, but other projects I’ve seen based on movement are sometimes really cluttered and not visually appealing, because movement is so unpredictable and abundant. This project however, is both visually pleasing and looks super fun.