Gifpop is the art of transforming a gif into a one, printable image (i.e. a postcard). Gifpop utilizes a process called lenticular printing, which is a technology that uses lenticular lenses to create an illusion of depth through images, or to create the ability to see different images from different angles (aka a “moving” image). The company takes up to ten frames and merges them to create a single image on a card (slower gifs with fewer frames will have better resolution). 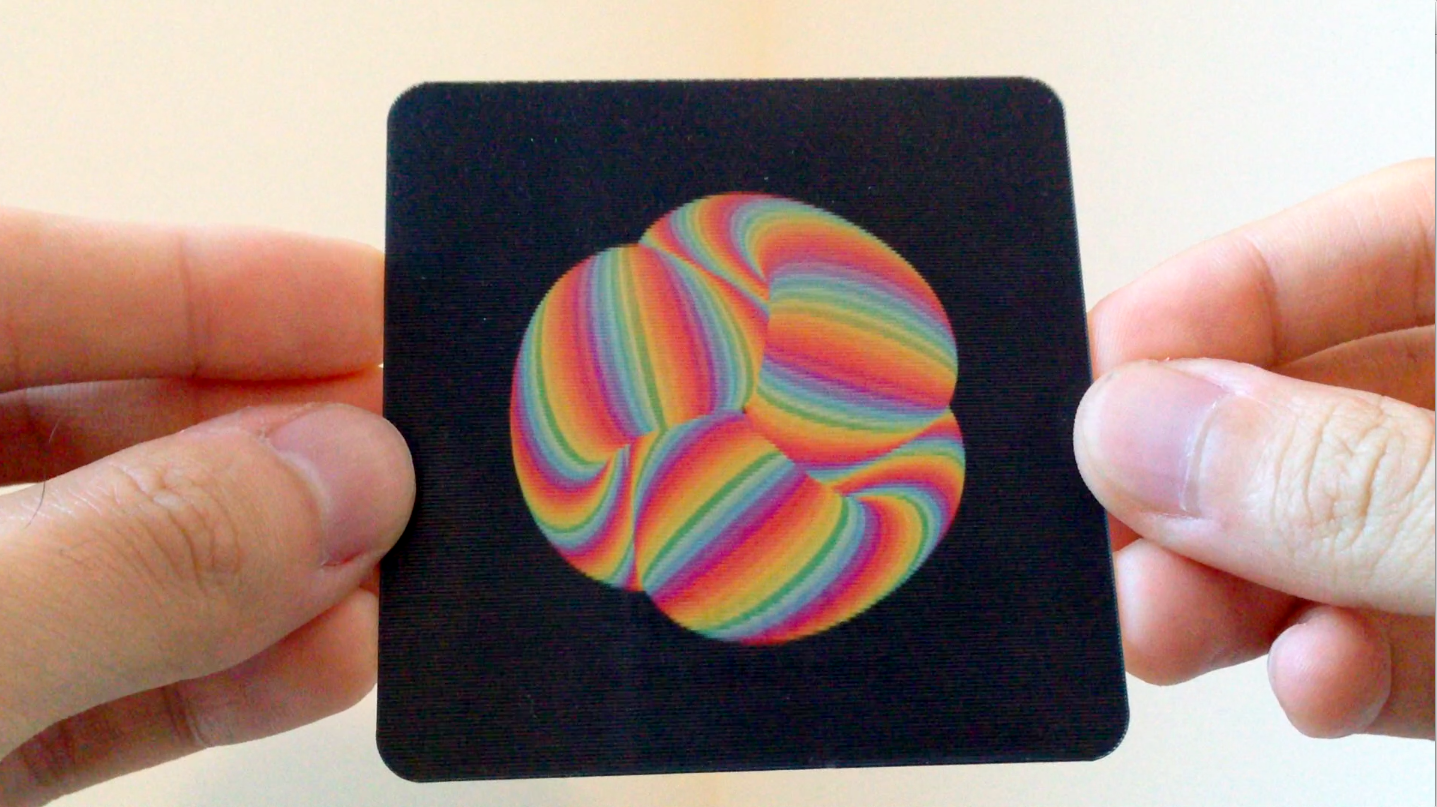 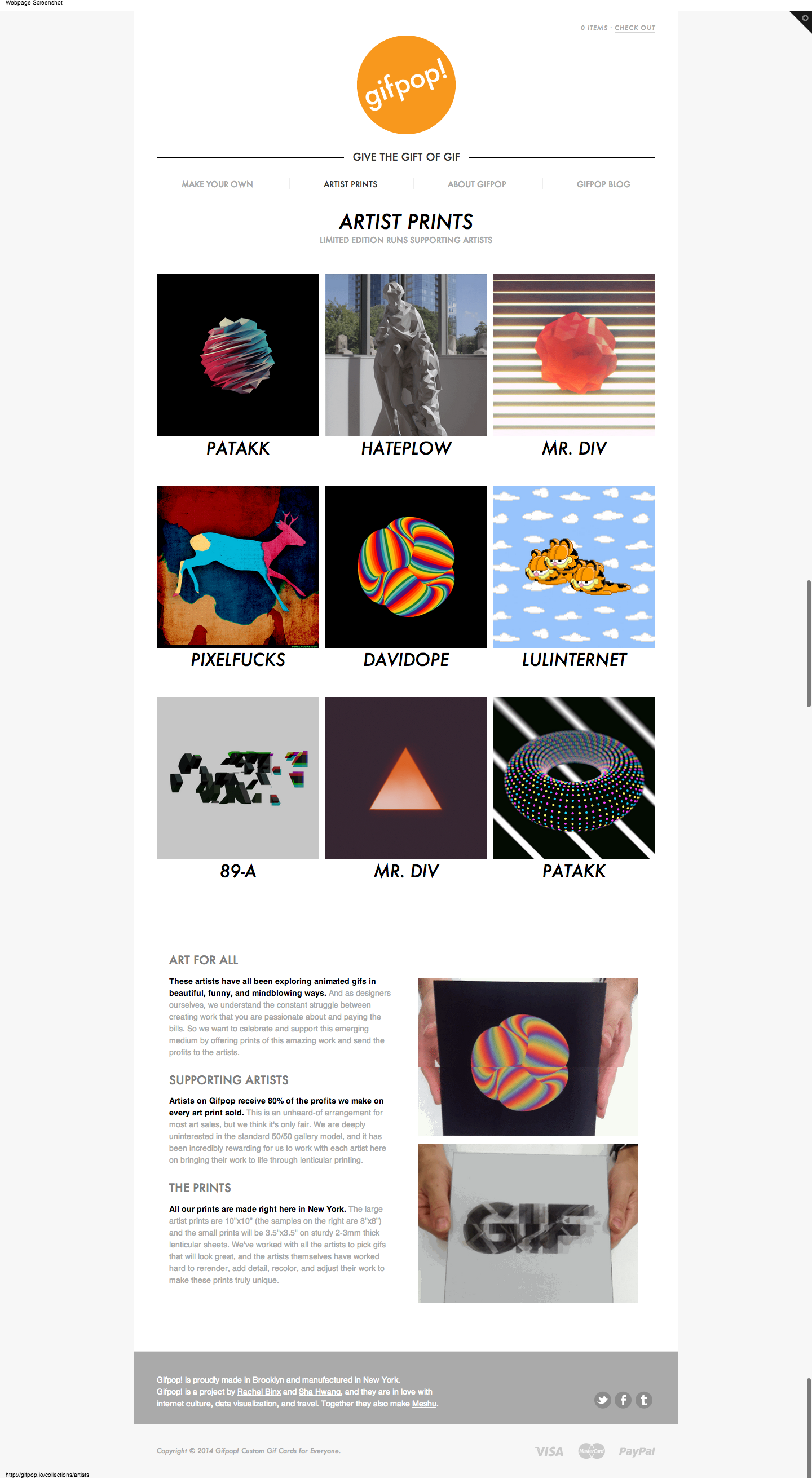 Stefanie Posavec is an information designer and data visualization designer based in London and focuses on data-related works. Her works of art depict non-traditional representations of data. In her Phantom Terrains project, she worked with Frank Swain and Daniel Jones to create a system that creates visualizations for wireless signals. Through specialized hearing aids, she was able to also convert wireless signals that surround us into sounds. The purpose of the project was to present a visual representation of the mass amount of streaming of wireless data surges that occurs in our everyday lives through internet exchanges and cellphone relays. I admire this information visualization project because amount of data that flows through has become a pervasive, yet invisible presence, and Posavec was able to develop a platform that makes us more aware of these data.

Andrew Huang is a Youtuber/ musician who is known for his “Song Challenge” video series, which invites viewers to dare him in feats of musicianship, as well as for several viral videos feturing his music. The very unique talent of his is how he used unconventional recordings of pretty much everything as instruments to create his music pieces.

In this video of his, he challenged himself using random sounds that are sent from his Twitter followers to create a sound track. He didn’t specify any requirement of the sounds as long as they’re anywhere near useable for editing. And the sounds are recorded very randomly by his followers and used random recording devices. He explained in this video how he used various computational techniques to remix the sounds including pitch-shifting, pitch modulation, eqaulization, layering, etc.

What I appreciate the most is that despite how the sounds he picked are drastically different and totally random. His ability to manage all these sounds into a synchronized drop is very impressive. To his sensibility, there are quite much value from randomness, and things ignored by most people can often be picked up and become part of a great artwork. And it’s not only the sound, but also video editing part that really adds to the flavor of the whole experience.

Hiroshi Kawano is a Japanese artist pioneered in the field of generative art. He was one of the first generative artists who believed the possibly of using a computer to program artistic works. Color Markov Chain Pattern was one of Hiroshi’s most famous work. It was created in 1964 after Hiroshi was inspired by the writings of the German philosopher Max Bense who wrote about the using scientific metrics to program beauty. This piece of work was also referred as the digital mondrians. Hiroshi wrote computer programs with complex mathematical algorithms involve random processes because although he set the rules for picture, he wasn’t able to pin down the actual result without printing. Hiroshi masterfully mixed subjective randomness with computational randomness together in his works. In the early sixties when computers were still giant machines that takes up a whole room, Hiroshi was the first to think it as a medium to create art. His works truly pioneered in the field of computational art and influenced many later works.


This painting was made between 1959 to 1962 by female artist Lee Krasner, following the death of her husband Jackson Pollock in a fatal car crash. Krasner at the period of time was going through a rough stage of her life with the emotional impact of the death of her mother and the attention drawn to her because of the death of Pollock. These were reflected in the painting with the dense curves covered with knots and slashes painted in the restricted tones of brown and white, as a they were once described by the critic Amei Wallach as having the “impact of a hurricane.”

This painting really inspired me because the randomness of it has brilliantly and accurately expressed the emotion of its author. It showed the how randomly generated drawing being more expressive and full of impact while being dynamic and unpredictable. This art piece also was only consist of the simplest element such as strokes and slashes, which led to further possibilities of creating an art piece full of volume but only with simple techniques and elements.

Jackson Pollock’s art is a main example of art generated by randomness. He was pioneer in abstract art, breaking boundaries of what artists can represent in an image. Pollock lets physics be the main player in his process and he was one of the firsts to make art with the canvas horizontally on the floor, while splattering paint on top. Andy Warhol made fun of this with his Oxidation painting. He had his assistants pee on a canvas that was laying horizontal to the floor. In this he also lets physics be a main player in the making of the work and is a diss to Pollock as pissing on the canvas has this meaning, while he also uses the same creative process to achieve the work.

James White created a program called Forge, which helps White to create art pieces where many elements are out of his control. I admired that not only did he want to create random art, but he also created a program / tool to help himself and other artists do the same. He stated that, “The program forces me to allow elements to react unto themselves.” I think as an artist, you usually want to be in control of every element and it is interesting that he wanted to help himself let go more.

Although I am not sure how the algorithm runs, I am assuming that he is able to input certain general shapes or patterns he likes and the program is able to iterate them in different sizes, colors, and positions randomly. The artist still has control in the sense that they are able to decide what sorts of shapes and patterns are in the artwork, however, must let go in order to get the full effect of randomness. By using a program to aid him, it is truly random since humans struggle to make random choices. The result is a beautiful piece of art and it seems like White has modified the image afterwards adding fade effects, etc. I admire that he created his own program to aid his work.

Interruptions (1968) by Vera Molnar is a series of drawings of computer graphics generated by Molnar, herself. Molnar introduced randomness into her practice when she began to use computers because she realized humans could not produce pure randomness without it looking repetitive. From what I’ve gathered through research, Interruptions was made using an iterative process. With each new work, she modified her algorithm to build upon the last, exploring a range of possibilities. This implies that her earliest images in the series can be defined as the most random. As she continued to alter her code, adding new structures, her algorithm generated images more specific to what she desired. Molnar’s meticulousness is apparent upon viewing her work: Viewers can see that Molnar used a grid to structure the placement of a line. There is obviously a set of rules that predetermine how the lines shift. I admire the generative process that Molnar placed her code under. Her use of programming to explore ranges of possibilities is an interesting use of computers. She understood the limitations of humans, and thereby employed computers to do the work for her. She was a pioneer and Interruptions is a manifestation of her ability to think outside of the box.

This is a link to the artists page, and below is a piece that he randomly formulated. 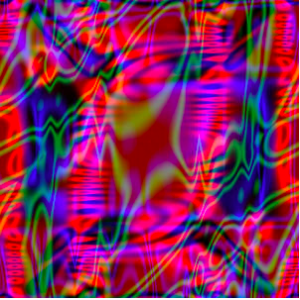 This project was executed by a student at Harvey Mudd College named Christopher Stone. He generated a program that makes randomly generated arithmetic expressions that are translated into intricate pieces. The artist uses the traversal of an abstract syntax tree as an algorithm to generate the intricate works, as well as functions like reverse and append in various programming languages to get the desired looks, but all of the arithmetic inside the functions are totally randomized. By using sin and cos functions along with pi, the results are beautifully colorful abstract works. The resulting images are representative of ‘glitch’ artwork and are simple and complex at the same time.

This is a collection of work of a course happened during 2015 spring in RISD led by Carl Lostritto who is a Graduate Program Director and Assistant Professor of Architecture at RISD.

These work are inspired by the most reliable source of randomness universally available on the computer, random.org, which samples natural phenomena and digitally records and processes it to achieve “true” randomness, many students are inclined to operate physically, and experiment with material media to generate random values. Students find themselves facing the same quandary raised by Bishop Derry. Something like a splatter of paint may be unpredictable at first, but as the mechanism for splattering paint becomes more controlled–and less contingent, it becomes clear that randomness can be rarely achieved by physical means–at least on the scale of paint. But it can certainly be done. Lavarand is one example in which the behavior of Lava Lites helps to generate random numbers. Another related example entails creating a manually-operated random machine with geometry. In a course I once taught, Matthew Solomon created a random number generator with a triangle as a seed. A line bounces within the triangle based on a set of rules. Numbers are generated based on where the line intersects the edge of the triangle. Aaron Tobey wrote a script to execute a similar though slightly more complex series of geometric operations and logical rules to build a random sequence.

The work suggests that computing may serve as a medium for art rather than a tool to make art. Because randomness so inhuman, to wield might mean to undermine our humanity, but it also might function as a foil in our efforts to better understand the nature of our own creative instincts.