The readings, assignments, and projects below constitute the Week 7 Deliverables and are due by 11:59pm EDT on Friday, October 12th:

Our Looking Outwards topic for this week is computational information visualization. We ask you to select a project in which an artist, designer or other researcher has created custom software in order to collect and/or visualize a dataset.

There are also a number of prominent blogs specifically devoted to documenting computational and interactive information visualization, including:

Identify a particular project or work which you find intriguing or inspirational. In a blog post of about 100-200 words,

This Assignment is to be submitted through Autolab. Its purpose is to practice your skills with arrays, iteration, and introductory information visualization.

Below is a (longish) line of p5.js code. It creates a variable called presidentHeights that stores an array of 44 numbers. These numbers represent the heights of the US Presidents, in centimeters, using data from Wikipedia. (*Note that Grover Cleveland is represented twice, as the 22nd and 24th President.)

Write a p5.js program that uses a for() loop and array-access techniques to plot these numbers as a bar chart. An example of how this bar chart might appear is below.

In this Assignment, which should be uploaded to Autolab, you are asked to perform a specific modification to the sketch below.

Please study the following sketch, which generates an ever-changing green terrain against a blue sky. On each frame, the sketch uses a custom function called calculateAndRenderTerrain() in order to compute and display the procedural landscape you see. (The guts of this function have been deliberately obfuscated; its details are not relevant, and are not meant to be legible to you.) As a side effect of its actions, this function also populates a global array of numbers called terrain. This array is what you will be analyzing in order to perform the requested modification.

Your job is to write code which automatically plants small flags on the hills of this landscape. Here’s an example of what your flags (or trees, streetsigns, cell towers, skyscrapers, etc.) might look like:

For this Assignment, how your flags look is entirely up to you. However, what is crucially important is where they are placed. You must ensure that your flags are placed at the tops of the terrain’s hills.

You will observe that there is an empty function called placeFlagsOnTerrain(). This is the place where you should put your code to draw the flags. Please note that there should not be any reason for you to modify setup(), draw(), or calculateAndRenderTerrain().

We suggest that you create a helper function (e.g. drawFlag()) that draws a flag at a specific location. Then the placeFlagsOnTerrain() function can analyze the terrain, and invoke the drawFlag() command as necessary.

Here’s how to get started:

NOTE. You may notice that some flags seem to flicker. (The issue affects roughly one flag in fifty). It can be observed in the 42nd and 99th peaks in the current scene. It occurs because of very small differences arising from round-off errors in how the noise() function is being re-sampled and is unintended. The problem could be eliminated by storing values from noise() rather than reusing them, but we’ve elected to keep it simple and ignore this artifact. The key information is that this issue is NOT YOUR FAULT and you should just ignore it. The core problem is to make sure you understand how to compare an element of an array with its neighbors.

(The diagram below explains why index checking can be important.) 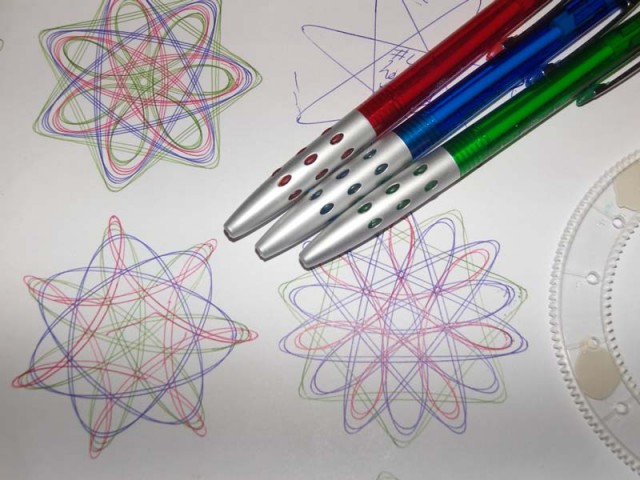 The Spirograph was a toy with pens and gears for drawing curve patterns.

Mathematical curves allow for unique, expressive and surprising ways of generating and controlling graphics. This open-ended Project invites you to you experiment and play with the aesthetics of curves.

Try clicking in the example below, to switch between an epitrochoid and a cranioid:

Please note that there are an infinity of different ways that you can render your curve(s)! For example, below are five different ways of rendering a circle. Also, please note that many curves on MathWorld are “open” (such as spirals and parabolas), and can’t be “closed” (like a circle); those curves are totally great and just fine too!