The project was designed by SHoP Architects in 2016.  What is amazing about the project is the completely digital design and the 100% 3D-printing. As a designer, I feel very excited about the power of machine to achieve what human cannot achieve, which sets free designer’s imagination and has potential to bring more exciting works to our physical world. As an architecture student, I was tortured by endless repetitive work in design process but now I believe computational fabrication will take all the job in the future and designers can focus on the intellectual work.

The material used in the prpavilion is carbon fiber, which has both high strength and the flexibility and thus can be used in 3D printing. The design can be achieved using Rhino and Grasshopper. Another thinking of mine is that the design can be integrated with ecological features such as having plants in its structure.

Digital Grotesque II (2017) is a full-scale 3D printed grotto (cave), designed by famous computational architect Michael Hansmeyer. It is interesting to consider the medium that computational fabrications such as this exist in because they are intricate and naturally built but also man-made. I admire the extreme amount of detailing in the caves that the computer generated, also it shows the full possibilities of computational architecture and that we no longer have to look at a building and consider the manpower or human-skill it takes to physically sculpt/design building art. The article states  the idea that, “while we can fabricate anything, design arguably appears confined to our instruments of design: we can only design what we can directly represent. “, which is interesting because although fabrication offers a wealth of new possibilities, it is limited due to its nature of control and execution, therefore the article poses the idea that we need new tools of design.

Video below shows the interior of the computationally fabricated grotto.

The San Francisco Museum of Modern Art has always been a staple culturally. After three years of closure the new facade adds a sparkling white addition to the Bay Area skyline replicating the rippling waters of the bay. It was fabricated by Kreysler and Associates in partner with Snohetta Architects who have experience with composite materials and acoustic design.  A large system of facade panels were attached with joinery directly on to the front facade of the building creating a fascinating undulating feature the moves in and out of shadows and space as you approach the building. Each panel was individually designed and fabricated using layers of Monterey sand, fiberglass and eventually sandblasted for finish. 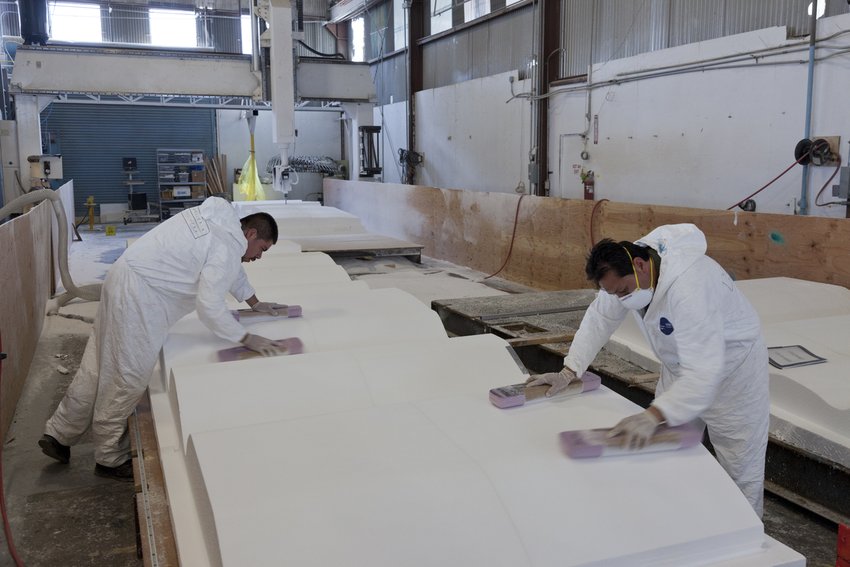 This project is very interesting because it shows how computational design implemented with an economic and efficient construction and installation process makes full scale computationally designed structures a conceivable notion. Using a series of geographic, culturally and economic nodes around the museum, Snohetta designed a parametric form that tries to push and pull its surroundings in a natural overlapping of activity and interaction. The wave form on the front facade reflects this idea extremely well.

fdecomite on flickr’s work caught my eye, first because the shells seemed so realistic, and secondly because all the computation and experimentation that had to have gone into the this level of biomimicry is extremely impressive. Imagining going back to the spiral exercise we did in lab last week and creating a 3d plane out of it blows my mind. Although there weren’t any details provided for the reasons behind this project (I suspect it was just done out of curiosity/for fun), I can easily see how this kind of prototyping would be useful in scientific research. The possibility of adding a variation aspect, like we did in project 2, basically means that an infinite amount of shell models could be created, and the addition of 3d printing using calcium or other more realistic materials would provide an quick and environmentally friendly way of studying, for example, how calcium in seashells is affected by rising levels of acidity in the ocean.

Silk Pavilion is a project created by the MIT media lab. They studied the movements of silkworm and created a pavilion with the paths. This project combined technology with biology. From studying animals around us, we can learn a lot more about nature. And technology such as 3D printing allows us to mimic the behaviors of animal better. The silk pavilion is an amazing piece of architecture because it cannot be built manually. It is created only because of the existence of technology. By combining technology and biology, we can create more amazing pieces of architecture like the silk pavilion. Not only architecture, perhaps clothing, everyday objects, and art. The potential is endless. 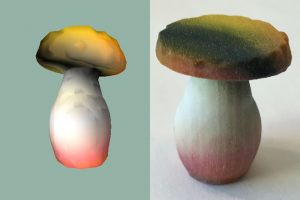 This image is a computer’s take on a mushroom!

This project was created by Joel Lehman, an assistant professor at the IT University of Copenhagen. The work is untitled, but it was created in 2016. Link: https://www.popsci.com/creative-ai-learns-to-sculpt-3d-printable-objects.

I really liked this project because I thought it did a good job of incorporating a human touch to a rigid process. In fact, the algorithm mimicked the human learning process via deep neural networks.

From what I can tell through the use of image recognition, the computer can get fairly close to something that resembles an object. Though not perfect, this is something unique. The computer is in essence drawing an object in its own style. In a way the algorithm is generating objects at random and through many many repetitions is able to produce something close to the object it has been trying to draw.

The artistic sensibilities are manifested in the creation algorithm. While the algorithm is random, the process in which it is generated (better versions serve as starting points for future generations) helps to determine the style of the content being produced. In fact, one can tell that all the final images were created by the same algorithm.

I’m most interested in art that engages with its audience in some way, Marc Fornes’ architectural work, Minima | Maxima does this.  This is somewhat due to the fact that these works are structures that allow people to interact by walking through, and also because the futuristic appeal lends itself to a type of wonder for onlookers to experience. This work is made as a way to remove ourselves from the life around us, and experience something  we hadn’t before. Not much is said about the algorithms used to create this work, as the bigger feat is the thinness of the material and the height of the structure. It is the tallest structure to be made out of materials( aluminum) as thin as a coin. Image to show height and shape of Minima | Maxima

Vespers III
Vespers III is a project (a collection of masks exploring what it means to design with life). It explores ancient typology with technology. It points towards an imminent future where wearable interfaces and building skins are customized to not only fit a particular shape but a specific material. I really admire how this work takes a stab at how technology/ computation can play a role in visualizing natural topics/ ideas. Computational design is matched with additive manufacturing and synthetic biology  to digitally fabricate objects. 3D printable bioactive materials are used to template the biological response.

Robots in architecture is a fascinating concept to me. People and robots working together to achieve the same goal portrays the potential for a great future for both humans and machines. The development of robots to improve human capabilities in art and life will continue to grow exponentially in number and quality, which is incredible to think about, considering all of the possibilities that machines present to us. If you take a look from the perspective of sci-fi fiction, there is a possibility for it to all come crashing down on us as AI becomes integrated into most designs, but I believe that that is unlikely because of projects like these where the people and robots function as partners.

NABEKIESAV (2013-2014) is a 3D print that belongs to a larger series of three “strawberry sculptures” including AELBWARTS and NABEKIARTS. Crafted by Nick Ervinck, this series is inspired by his exchange with Dr. A.P.M. Ton den Nijs, a scientist at the Plant Breeding Department of Wageningen University. NABEKIESAV carries Dr. Nijs’ rot-resistant strawberry hybridization process to the extreme. I admire the commanding presence of this utopian strawberry sculpture. From the shape of its vase to the blooming quality of its leaves, it looks as if it may come to life. Why I admire this aspect is because it goes to show the complexity of Ervinck’s thoughts on fruit hybridization. In addition to qualities that make NABEKIESAV seemingly come to life, are sculptural contradictions that make for an impactful experience. While there is something purely beautiful and poetic about the form and texture of his sculpture, Ervinck writes that his sculpture “resembles a horned demon emerging from its cave.” He has transformed the simple strawberry into something surreal and out of ordinary, a manifestation of his own thoughts on fruit hybridization. While I can’t really guess the algorithms utilized to 3d print his sculpture, Ervinck’s final form well depicts the artist’s thoughts on an important topic of today that is the manipulation of the purest forms of nature.