Not being able to hear when another vehicle is honking at you, or something else or from which direction that honk is coming from.

A device that would visually notify the driver that someone is honking and from which direction that honk is coming from.

An Arduino with sound detectors and LEDs/a visual interface.  When a sound above a certain volume is heard by the sound detectors, the corresponding LED lights up. If the same volume (with some tolerance) is picked up by both sound detectors, both LEDs light up. On a more realistic level, there would be detection for every direction away from the “vehicle” which would require more sensors. 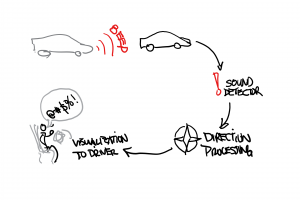 The flow of data starts with a car honking at the user’s vehicle, reaching the sound detector which then feeds an analog input into the Arduino which will decide which direction the sound is coming from. It will then turn on the corresponding LED or visualization to notify the driver that someone is honking at or near them.