For people who are listening to music while jogging, they may often times zone out and put themselves in danger as a result. Light is a great communication tool to warn others, as well as the jogger, to be careful and be aware of other people. In addition, when jogging alone, if something happens to the jogger, some people may not notice them unless something drastic happens.

A device that would control a light that will react differently to the jogger’s actions based on various sensors to ensure that the light is required and to ensure that the light is being used in the optimal setting. The device could also address other issues like the speed of jogging which can be unintentionally changed or the issue of emergencies and attracting others’ attention in critical scenarios.

An Arduino with potentiometers, switches, and a photoresistor to act as input data to control LEDs which represent a more complex visual interface.  When an emergency is detected by the sensors or reported by the user, the visual interface will try to attract attention through the use of the LEDs. On a less serious occasion, the device will detect if the user is running too slow or too fast. Lastly, if the user tries to turn on a flashlight to light their way, the device first considers how bright it is outside. If it is still bright out, the device will ignore the command, assuming the user pressed the switch by accident. If it is dimmer outside and the user switches the light on, it will blink to attract the attention of vehicles and bikes to make sure that they can see the jogger. If it is quite dark out, the light will turn on automatically, whether the user flips the switch or not. 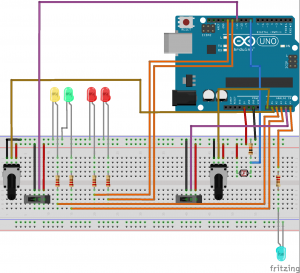 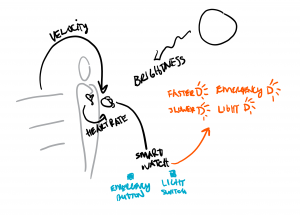 The sensors collect data which help to inform the user and embed intuition into the outputs, trying to provide a variety of features which make use of the information to improve the user’s jogging experience.