Not being able to hear when someone is calling your name/trying to get your attention, whether in the context of a workplace, airport, etc.

A device that would physically or visually notify an individual when sensing that someone is trying to get their attention.

An Arduino with a microphone/other device with a microphone and LEDs/Servo.  Specific words cause the LEDs to flicker/Servo to make movements to grab the individual’s attention. and plays a sample on the speaker stating the status of a configuration.  Example: when sensing that the user’s name is being called, the device will flicker/move. 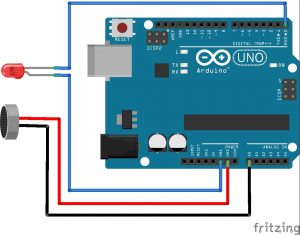 The Fritzing sketch shows diagrammatically how the microphone would input information to the Arduino as well as how the LED/Servo would be connected to the output pins. Not pictured, is that the Arduino would have to be connected to some battery source.

I’m not familiar with voice recognition with Arduino, but I found a project that has done it before with specific hardware (link here) and there are other devices that surround us that would be able to accomplish the same audio processing as well (ex. smartphones, smart watches). The results of the audio processing would trigger a digital output to the LEDs/Servo to communicate to the user. 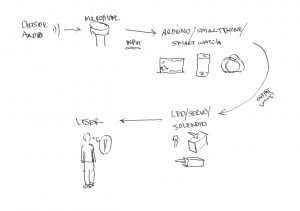 The flow of data starts with outside audio reaching the microphone which then is fed into the Arduino (or other audio processing capable device) which will decide whether or not to send a signal to the LED/Servo/solenoid based on whether the sound recognizes the users name. If the name is recognized, the signal is sent and it grabs the user’s attention.