I had seen Roman Verostko’s work before and it has always been something that’s intrigued me. His works are obviously artificially made but the physicality of the actual work and the materials that they are made with create pieces that have a seemingly contradictory nature. By 1987, developed software that creates generative drawings. These artworks, which he has coined as algorist art, uses a step by step procedure to perform a specific task.
His software controls a machine arm called the pen plotter which creates his algorithmic drawings. He sees this arm as an extension of his own drawing arm. His earliest use of electronics in his art was in the sixties with his experimentation with audio visual programs. 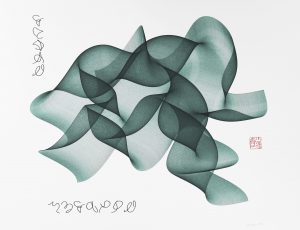