A Narrative on Creation

“MULTIVERSE – The eternal birth and death of infinite parallel universes”

This project was a site specific instillation in Borgo delle Colonne 28, Italy. In order to project a fantastical yet grounded opinion on the creation of the universe, the production team listed below used sound, algorithmic projections and reflection of materials to create the essence of infinite space and time. 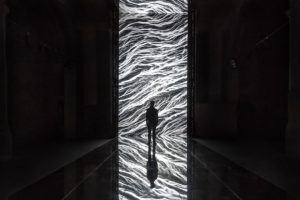 These artist programmed both sound and visuals with the intent on exploring rational explosion and implosion of particles of various scales and speeds to imply the creation or destruction of “universes”. The production teamsprinciples behind this project were to explain how the universe can be constantly compounded within itself. The existence of black holes are referred to as moments of inception of new child universes. A vast complex system of layered parallel universes is tantalizing and inspiring to me. This instillation transmits a magnitude of reality that is hardly perceivable into a medium that gives a portal-like insight into the true scale of the universe.  The way it also reflects off the ceiling and floor shows the infinite nature of the creation outside and within our own observable capabilities. 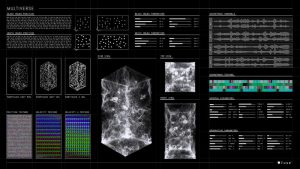 The images were generated with a program called openFrameworks and it serves as the “creator” of these universes. Just as creation remains within its own bounds, the generative sounds and shapes are within a similar family. However just as true creation is random there are random elements making slight changes in multiple factors. The sounds contribute to an overall essence of being and scale. The inception of possible universes is a magnificent and crazy thing to imagine due to the sheer size and time it might take. 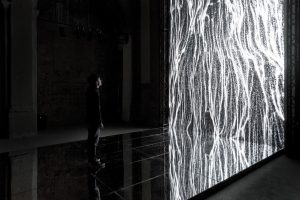