One project that I discovered that displays a sense of randomness is the composition In C by Terry Riley. This piece of music has many different interpretations to it because it is an open-ended piece. The ideal number of players is around 35, however there have been many instances where significantly more or less players have performed it. Rather than having a written part for each instrument, In C only shows fragments of measures. It is each musician’s job to decide when to play each fragment and when to move onto the next one. No two players will be playing the exact same thing. What makes this piece “random” is that it is impossible for two performances to be the same if not even similar. The instrumentation always varies, and the piece can range from 15 minutes to over an hour. In addition, the musicians demonstrate a sense of randomness because they do not have a set time when they change to another rhythm, so every time they play it, it is different. What I admire about this project is that Riley was able to create a piece that allows each player to make their own artistic decisions and have freedom from the written page. 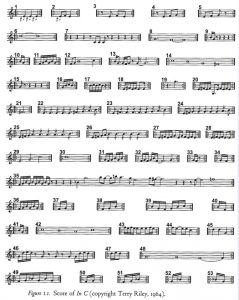 Sheet music of In C (https://nmbx.newmusicusa.org/terry-rileys-in-c/)

Performance of In C