OMOTE is one of many projects lead by CGI artist and programer Nobumichi Asai using a technology he calls “face hacking”. The team uses a code called Open CV which is used to map out physical objects and then project onto them while reacting to the subject in real time. Asai utilized this technology to not only map out the human face and project hyper realistic CGI elements, but he also developed an animation that would reflect the environment of the face, creating a realtime reflective texture. The project was showcased publicly on the internet with a 2 minute video two years ago and under the credits he lists himself as the technical director and only two other as CG designers. Asai himself has done other projection work involving sci fi movies such as Ghost in the Shell. The Sci fi imagery clearly inspires his cyborg like transformative projections. Additionally they also seem to influence his concepts behind his work of combining flesh with technology or at least giving the allusion of the two combining. 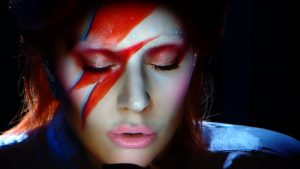 Recently he worked with Lady Gaga on her David Bowie tribute Grammy performance. The program allowed certain features of her face to be accentuated making her face look more like old glam rock star, while also allowing for animations of paint dripping and a spider crawling across her face to appear as if really happening on stage. This Technology has the incredible opportunities for other performing artist. It has the ability to potential push conceptual works as well as push narratives with in musical performances as Gaga did. 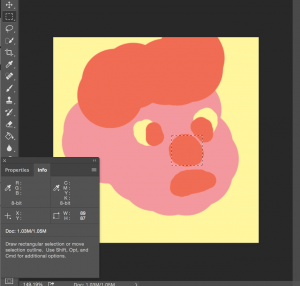 Like a few others I started out with a quick drawing with basic shapes. I then used the “Info” tool Photoshop to gather rough coordinates for the shapes. From there I tried to think of every color as a layer and roughly organized the code starting with the pink shapes and then going to yellow ones and then orange. The end result doesn’t look a ton like me but it still has my cheeks.