Vera Molnar is widely known as a pioneering woman of computer generated graphics, but her works actually exist between the computer and the hand drawn. She primarily designs algorithms and computes these drawings based on a grid that corresponds to a computed set of variables. In the drawing below, Molnar has already defined the possibilities for each output, but uses an algorithm to offset the repetition and order of these outputs. 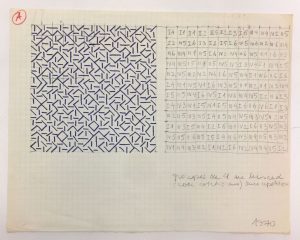 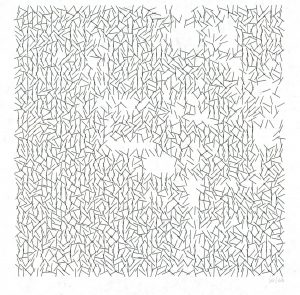 When Molnar worked with computers, there was a different richness to the drawing. Between this shift, from “machine imaginaire” to a “machine réelle,” (https://www.surfacemag.com/articles/vera-molnar-in-thinking-machines-at-moma/) Molnar was able to add more variation to her projects without the limitation of herself as the processor. Molnar’s randomness lies in the output of a logical algorithm. While the series of outputs is usually defined, the order, repetition, pattern of those outputs is randomly sorted based on the algorithm.

After the drawing, Interruptions, was completed, Molnar then began Interruptions a recouvrements, which used the original drawing to compute the algorithm for the larger layering of drawings which includes variation in the scale, shape, and line thickness.

Molnar believes one power of the computer is that the random can create an aesthetic shock that ruptures the systematic and symmetrical. The rigor and meticulousness which she applies to her logics, is the human bias that computation and randomness cannot create alone. The work is so powerful because the “randomness” exists within Molnar’s bias.