I wanted to make an illustration that relaxed the viewers and made them not too anxious about time. The possible settings I was thinking about were beaches, mountains, and waterfalls. I was craving bubble tea this whole week, so I decided to make a drink with a beach view. At the beginning of sketching, I got very excited with my concept. However, overtime, I decided to change the original parts of the abstract clock to something new. At first, I wanted to make water droplets to form on the glass every minute. Instead, I made the liquid level to decrease by every minute. For every hour, I changed the sky color and the ocean water color to become darker. At first, I had a hard time with how the time variables would interact with the shapes and colors. Midway through the process, I started to get the hang of where the time variables can be used in the code. I had a lot of fun with this assignment, because seeing the colors and the liquid height change were very satisfying. 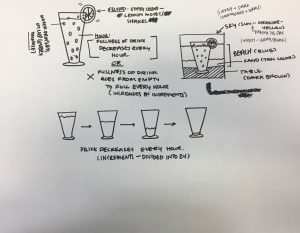