Utterback created Glimpsefor a collector’s foyer. It is an interactive multi-monitor piece that turns the entryway of the foyer into a dynamic experience for people who pass through. The visual shapes evolve according
to the people’s movement. The shapes that are created remain in the background, and the work continues to evolve as others come and go. What I admire most about this project is how it invites everyone to create one artwork, allowing people to somehow connect to each other. Another interesting thing about this work is how it turns the space into an interesting experience for people, adding some sparks into their daily lives as they pass through the foyer.

Above shows a video of Watson and Gobeille’s work Living Library, Source: https://vimeo.com/203193098

Like Glimpse, Watson and Gobeille’s work Living Library is also an interactive work. It works with the Connected World exhibition. The work utilizes two cameras and a laser light source projector. The cameras track the visitor’s hand’s positions, allowing them to trigger animations through motions. How the creators turn a book reading experience into a more interactive one fascinates me as now things that are limited by prints, such as sound and colors, are brought into life through animations.

Both Glimpse and Living Libraryuses motions to control the created visuals. This is what I would like to explore in my project. Even though it would be quite hard for me to create something that senses the user’s motions as smoothly as they do in these projects, perhaps I could utilize the mouse’s motion instead.

For my final project, I was looking at making a top-down dungeon crawler game. There’s plenty of games like this, like some of the original Legend of Zelda Titles, but the one I saw as most relevant to my project was Edward McMillen and Florian Himsl’s 2011 Flash-based game, The Binding of Isaac. Admittedly, I’d heard of the newer version, but I never really looked at the older one, which was initially made in a week. The way the player moves through rooms makes sense mechanics-wise, and means generating levels should be simple (in theory).


From here I took a look back to see what older games did for level generation, which ended up becoming a tangent that led to my finding Nethack. I found it fascinating mostly due to the ASCII graphics, but turns out it was made in 1987 by Mike Stephenson, and has had continuous edits and updates. In fact, their GitHub repository was last updated 15 hours ago, at the time of writing. I found it interesting in that NetHack levels take up no more than the size of the screen. They’ll never scroll. It’s also all open source, albeit written in C. If I was to follow this format, I could just store the levels in an array and be able to call them individually by number, which could be interesting. It also breaks up the really boxy rooms of Isaac, which relies more on having different environment assets placed in different places in each room.

AMATA K.K. is a Japanese game development company centered in Tokyo, Japan. What I wanted to focus on was the logo for their company. A square composition constructed out of slightly variated quadrilaterals with a few triangles thrown into the mix, they use this logo as an opportunity to communicate their strong abilities in animation. Although the logo is merely a flat composition of simple shapes, the proximity of these shapes and their slight differences convey a sense of movement and depth. In relation to our project proposal, this is exactly what we hope to communicate through our own imagery. The difference is that we would be actually animating these shapes to generate a series of images that will visualize more than just one wave of movement but multiple, like that of music.

LEVEL is an audiovisual experiment by Paris-based design studio IF for Paris nightclub Machine du Moulin Rouge’s fifth-anniversary celebration. It utilizes light to “represent the dialogue between space and its limitations.” Set to the ambient tracks of Trespur, LEVEL projects a fast-paced series of dizzying distortions on a transparent material superimposed onto a semi-reflective surface. Each viewer in the room sees something different as lights shift and change from any given perspective in the room. I found this to be an inspiration for my own final project due to the very nature of the project, but especially for their one projection of ripples. In addition, after seeing all these other kinds of projections, perhaps I will try other kinds of movement besides radial.

“All Aboard the Sonic Train”

The first project that I will draw inspiration from is “All Aboard the Sonic Train” by Phil Giarrusso. Phil Giarrusso is a designer, illustrator, and animator specializing in pixel art and game development. Inspired by a beloved childhood video game, Sonic the Hedgehog, Phil Giarruso recreates a scene from the game through motion graphics using a pixeled aesthetic. Because my project will involve a character running and jumping across a moving landscape, I was inspired by the aesthetic of this project. In addition, I enjoyed the colorful, bright colors in this gif, and I plan on drawing inspiration form this color palette and using it in my project.

The second project that I will draw inspiration from is “Flat Design Dragon for Games” by a design company called “Gigantic” which specializes in flat design illustration and 2D animation. Similar to the project above, I was inspired by not only the color palette and gameplay aesthetic, but I liked the usage of various layers within the piece. I plan on incorporating various layers and colors in order to create depth in my project.

For my final project, I’ve drawn inspiration from a handful of game designers that create intuitive, aesthetically pleasing games for web and mobile platforms.

Since I plan on creating an interactive dress up game, I’ve paid particular attention to the game developer Azalea, an artist known for creating almost a hundred fashion games for girls. She first draws the figures, clothing and backgrounds on Photoshop and then programs the interactive elements in actionscript 3 using Adobe Flash. Not only is Azalea known for maintaining her own site of exclusive games, but she’s gained attention for her unique artistic style and clean, intuitive designs. Since online games that are developed for children often use excessive decals and loud visuals, I admire Azalea’s distinct artistic expression and attention to usability.

While researching games with strong creative voices, I also drew inspiration from Badland, a mobile game developed by Frogmind. Following its release in 2013, Badland has received considerable attention for its captivating visuals, simple controls, and adventurous narrative.

I admire developers such as Azalea and Frogmind for their ability to combine beautiful visuals, strong user interfaces, and programming to create games for the public. While I’m developing my own game for this project, I hope to draw inspiration from these successful elements in my own design.

For my project proposal, I am creating an animated children’s book. I have found two interactive stories that, while more advanced, have really interesting levels of interactivity.

The first project is “ENOUGH” by Isaac Cohen. This project is an animated story that loads as the user clicks the logo. I find this project really interesting because of its high level of interactivity from the words moving with the mouse and the jellyfish-like creature following the mouse. 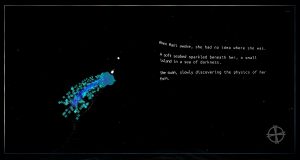 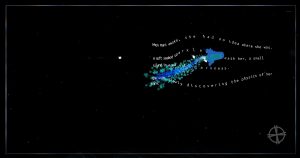 The second project is “a short journey” directed by Cher Ami. I appreciate this project for its very direct animation and creative use of interactivity. As each screen loads there is a “drag here” button that the user pulls across a line to begin the animation. For example the one on the right, zips the bag. When the animation ends, it moves to the next page.The aesthetic of this animation is truly beautiful. 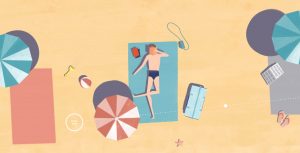 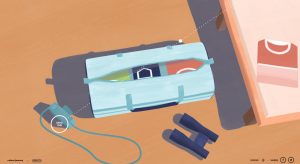 While both projects, are graphically quite different, they both grab the user and pull them into the story, through quite simple (to the user) animations. It’s really exciting to see how this concept can be produced and animated in such different ways.

In looking for inspiration for my final project, which will be some form of an audio sequencer (tagged with visual animations)— I’ll write here about three projects I’ve found that range from simple to more difficult and experimental.

Rise and Fall from Design I/O on Vimeo.


The two projects I am comparing are Basecamp (2014) by Leander Herzog and Rise and Fall (2010) by Design I/O. Basecamp by Leander Herzog is an interactive animation of colorful pyramids made with D3.js. The animation is interactive because it changes color every time the user clicks on the screen. I admire the simplistic and colorful aspects of the animation and how it responds to the user through the color changes. For my final project, I want to create interactive, animated landscapes, so this project gives me a reference of how I can show depth and layering in my composition. Because the animation is simple, it lacks a narrative, which is more prevalent in the other project Rise and Fall by Design I/O. Rise and Fall is an interactive magazine cover made with openFrameworks. By rotating the magazine, the user goes through a journey in which they interact with surreal creatures and environments that switch back and forth from water to sky. I admire that this project allows the user to control their own paths and stories. I also admire how the animations respond to gravity and physics, which adds a sense of realism and complexity.

For my final project for this class, I would like to make an interactive game that involved both the mouse, camera, and a patterned background of some sort.  The patterns will lie across the white space of the screen on the background. The patterns will be composed of different shapes with different shapes and different colors. The task is to “pop” or click on the right colors or the shapes in order to win. when the person on the camera moves, the patterns will move according to the silhouette of the person in the camera. When the user finishes the game, the screen will transition into a different screen and will inform the user whether they have won or lost the game.

This is a project called Sand Dollar by a programming company called Complexification. This project was created through a constructed radical pattern through a technique called sand stroke painting. The radical form is controlled under a delicate craft of tree-like structure that is slowly turned clockwise around the origin. Hundred of radical patterns are created through programming creating a form with its own unique shape.

This installation is called 1984X1984 by an electronic artist, Rafael Lozano-Hemmer. When a person stands in front of the screen, it mimics the silhouette of the object by shifting the patterns on the screen. This is one art piece from his series, Shadow Box in which it is built upon a computerized tracking system. The background pattern is pulled out from random addresses photographed by Google Street View. The piece is moved by any object interacting in front of the screen.

These two projects have a very similar characteristic. They are both generated through programming with a basis of patterns that fill up the visual composition. These projects can potentially inspire my final project because there are many ways to play around with patterns. I plan to create my final project with a pattern of some sort that has the ability to interact with another factor. I personally enjoy interactive art because the second element that reacts to the base of the art becomes part of the artwork.