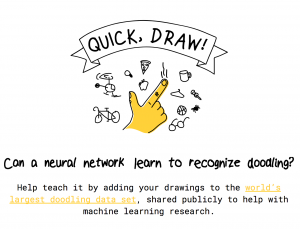 This application was developed by Jonas Jongejan, Henry Rowley, Takashi Kawashima, Jongmin Kim, Nick Fox-Gieg, and the a few other individuals in Google Creative Lab. The creators were first inspired during a hackathon where they wanted to a create a pictionary-esque game with artificial intelligence. It utilized technologies and algorithm that was developed by the Handwriting recognition engine developed for Google Translate (which also most likely what inspired it) as well as other machine learning concepts. The model was trained to become better and better at identifying doodles as more people provided more data and samples for it to analyze. It could be further developed into a picture keyboard.

I wish to do something with computer vision in the future so this is similar to what I strive to learn and understand in the future. It is also a very creative and fun way to apply machine learning and AI.