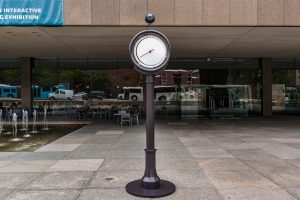 The Light Clock is a project that has been on display at the Carnegie Museum of Art by new media collective the Innovation Studio. Outside the museum, there is a clock with a hand that makes a rotation every 5 minutes, and when it reaches the top it takes a 360 degree photograph of its surroundings. In the lobby of the museum, the photographs are used in an interactive display that allows viewers to spin their bodies to left to change the point-of-view and to the right to change the time. The project required both new software as well as new hardware as nothing similar had been done before. They don’t elaborate on this in the blost post I found, but apparently the sensor that detected when and what direction a viewer was spinning was particularly challenging. The artists where all particularly inspired by a quote from critical theorist Roland Barthes – “…cameras, in short, were clocks for seeing…” The project is as much about the clock as much as it’s about the camera. It is meant to explore how we perceive space and time to be deeply, intrinsically related when in many ways they are not. Seeing them so blatantly ripped apart is jarring to the viewer. The display is curved around you, increasing the sense that you’ve been transported to a universe where you cannot navigate space and time simultaneously.

On their blog, the artists describe this project as the ultimate new media project. They claim that the success of this artwork as forced the museum to “consider where art objects can come from” and ponder whether perhaps the Light Clock isn’t art but something else entirely. I’m not sure whether it’s quite as groundbreaking as they say it is, but in the context of the Richard Serra and Henry Moore sculptures that neighbor it, it is certainly a unique project.