“Fractal Effervescence,” by David April, is a project that has impressed me greatly. The image, which I will add here, is a computer generated fractal, an image or figure that is constructed of many parts, and each part is exactly the same as the entire figure. In a sense, if you look closely at any piece of the figure in the image, you will find its the same image, just smaller. 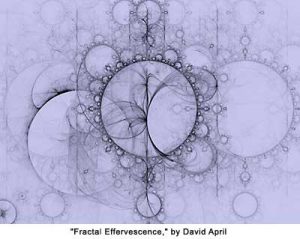 The program used to generate this kind of art is based on recursion, which I hope to learn more about within this course. Recursion is a type of programming that makes the entire function into a loop, in a way, allowing the function to call itself to process the information given.

I’m unsure of the date of this art, though I do know it was created by David April, and the title is “Fractal Effervescence”. The artist is very interested in the concept of fractals and works to find new forms.