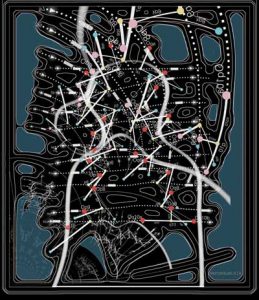 Persona in Fields by Sherban Epure is a series of inkjet prints that fuses mathematical rules, fine art and technological capabilities to produce visual metaphors. It is a part of his collection of computer-executed, mathematically-based work. The fascinating aspect of this particular work (P211_181_neg of the series), is that it is an aesthetically-pleasing piece of work comprised of mathematical components that were computationally programmed. And because it was computationally programmed, it allows for alterations in the various stages of the work without any of the other stages being affected.  This cannot be achieved in conventional paintings, where once a layer of paint and/or detail has been placed on the canvas it would be impossible to alter that ‘stage’, and the final stage of the work is displayed. Without a more specific description from the artist it is hard to gather what mathematical theories and what form of computational manipulations were incorporated to produce this artwork, but the general nuance of the creation process is described as aforementioned. Epure also has a series of hand-executed work based on mathematics in which he attempts to convey that incorporating computational aspects in the production of art does not diminish the value and/or interest of the work.