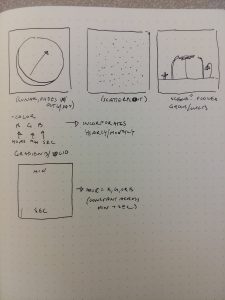 I played around with a few different ideas in my sketches (I thought about doing something related to lunar phases, a clock that represented time by randomly scattering dots on a grid, and a more representational clock that showed time by the growth of a flower).

I really wanted to create a clock that was abstract enough to almost be without a focal point, and decided to play around with color as a representation of time. I originally just had the r, g, and b values of the background assigned to the hour, minute, and second. This was a little boring for anyone who didn’t watch the clock for a long period of time, so I decided to play around with gradients and also incorporate the day and month