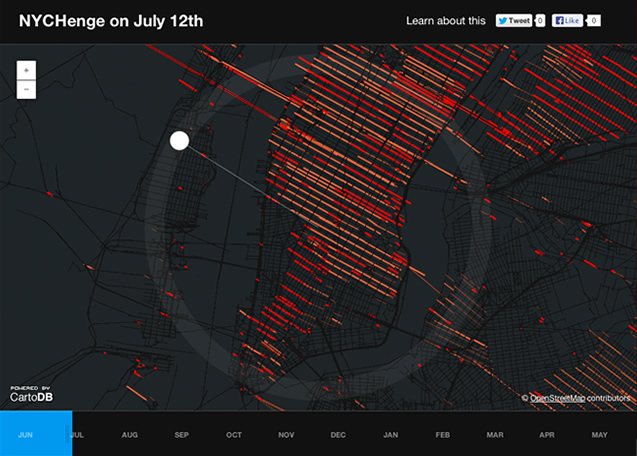 NYCHenge, created by the Carto team in 2013, is a project that visualizes how the sun aligns with the streets of New York City, inspired by the two times a year the sun lines up with the midtown grid of streets (“Manhattanhenge”). Sun-alignment is indicated by orange or red colors; the more red the color gets the more in-line the sun will be with that particular street. Users can explore the entire city of New York (not just Manhattan) across the entire year to find other, mini-henges or just figure out when the sun will shine in their faces as they’re driving down certain streets. It’s created with Open Street Maps, CartoDB tools, and the SunCalc javascript library to figure out the sun position.

I was drawn to this project because of its interesting focus, and the way it’s both interactive and relatively easy to understand. One downside to the simplicity of the map is that non-New-Yorkers will probably have trouble identifying the unlabeled streets, but the general gist of the project is still obvious.