As a really big Disney fan I really wanted to create my final project based on my favorite movie: Big Hero 6. I wanted to create an animation of SanfranTokyo because I’m just really in love with the city and would love to draw it using p5js. I’m not sure what view I would want to draw of it yet (first-perspective view in the city or an aerial view from the sky overlooking the city) but I definitely want to include the iconic golden gate bridge in it. Below are some of the pictures I’ve been looking up for references. I plan on drawing the city view I want on illustrator first before actually coding it. What I specifically want to do with this city is to make it interactive in some sort of way (unsure specifically how) and have it change appearances depending on the time of day and incorporate several animation aspects like having the characters or just random people walking around the town to make it seem really lively like the city actually is. 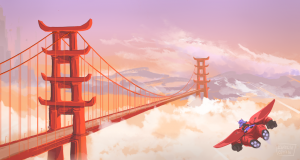