The readings, assignments, and projects below constitute the Week 9 Deliverables and are due by 11:59pm EDT on Friday, October 27th:

This week, we hope you’ll find inspiration in the things your friends have discovered. Find one or two peers in the course whom you know. Browse through their Looking Outwards assignments until you find something unfamiliar, that sounds like it could be interesting. Read your peer’s reviews, then check out the project they cite. In a blog post of about 100-200 words,

In this Assignment, you are asked to write code to animate a walking character with sprite images. (You are provided, below, with the necessary sprite images and some template code to complete.) The final goal of this Assignment is to create an interactive scene, in which the character walks over to the places where the user clicks. Here is a animated GIF demonstrating what your solution will resemble:

Here is the source image for the walk cycle of the animated character we’ll be using:

The individual frames of this animation can be found in this Imgur.com album, and also in this zip file. There are 8 frames, which are provided to you as .PNG images with transparent backgrounds. (We recommend that you don’t use the local copies of the images unless you plan to be working offline and you understand how to test p5.js sketches from a local server.)

Below is the starter “template” code you will use to create your project. Please carefully note the places where you are expected to add code.

Then, as per usual upload to Autolab:

In this creative Project, to be uploaded to WordPress, you will create a computational portrait, using some kind of original surface treatment (such as a “custom pixel”) of a hidden underlying photograph.

In Peripheral Vision: Bell Labs, the S-C 4020, and the Origins of Computer Art, Zabet Patterson writes:

In 1959, the electronics manufacturer Stromberg-Carlson produced the S-C 4020, a device that allowed mainframe computers to present and preserve images. In the mainframe era, the output of text and image was quite literally peripheral; the S-C 4020 — a strange and elaborate apparatus, with a cathode ray screen, a tape deck, a buffer unit, a film camera, and a photo-paper camera — produced most of the computer graphics of the late 1950s and early 1960s. At Bell Laboratories in Murray Hill, New Jersey, the S-C 4020 became a crucial part of ongoing encounters among art, science, and technology.

The above image, created with the S-C 4020, is one of the first and most famous computer artworks ever made: “Studies in Perception”, by Ken Knowlton (1931-) and Leon Harmon (1922-1982), developed as an experiment at Bell Laboratories in 1966. According to MedienKunstNet,

The reclining nude represented the first experiment to scan a photograph into a computer and reconstitute it with a gray scale, using 12 discrete levels of gray, produced by mathematical and electronic symbols. The scanning process established a certain level of gray in a certain area of the photo and replaced it with one of the symbols. This process was used to try to establish the minimum amount of information the human eye needed to resolve an image.

The curators of the V&A Museum write:

Only by stepping back from the image (which was 12 feet wide), did the symbols merge to form the figure of a reclining nude. Although the image was hastily removed after their colleague returned, and even more hastily dismissed by the institution’s PR department, it was leaked into the public realm, first by appearing at a press conference in the loft of Robert Rauschenberg, and later emblazoned across the New York Times. What had started life as a work-place prank became an overnight sensation.

Around the same time, American painter Chuck Close (1940-) — an associate of Rauschenberg — began working to systematically deconstruct photography through painting. After achieving “photorealistic” effects through paint alone (as in his famous 1966-1967 self-portrait), Close moved on to create his own, highly personal “picture-elements”. In one series of portraits, Close’s images are broken down into regions comprised of numerous small circles in complementary colors. (Note how no square actually contains the color of the subject’s skin! Instead, a skin tone is approximated by a pair of blue and orange circles.)

Close has been at this for decades and has devised many provocative and truly astonishing picture elements, the most “personal” of which are undoubtedly the thumbprints he used to construct this 8-foot tall portrait of Fanny, his wife’s grandmother (click to enlarge). 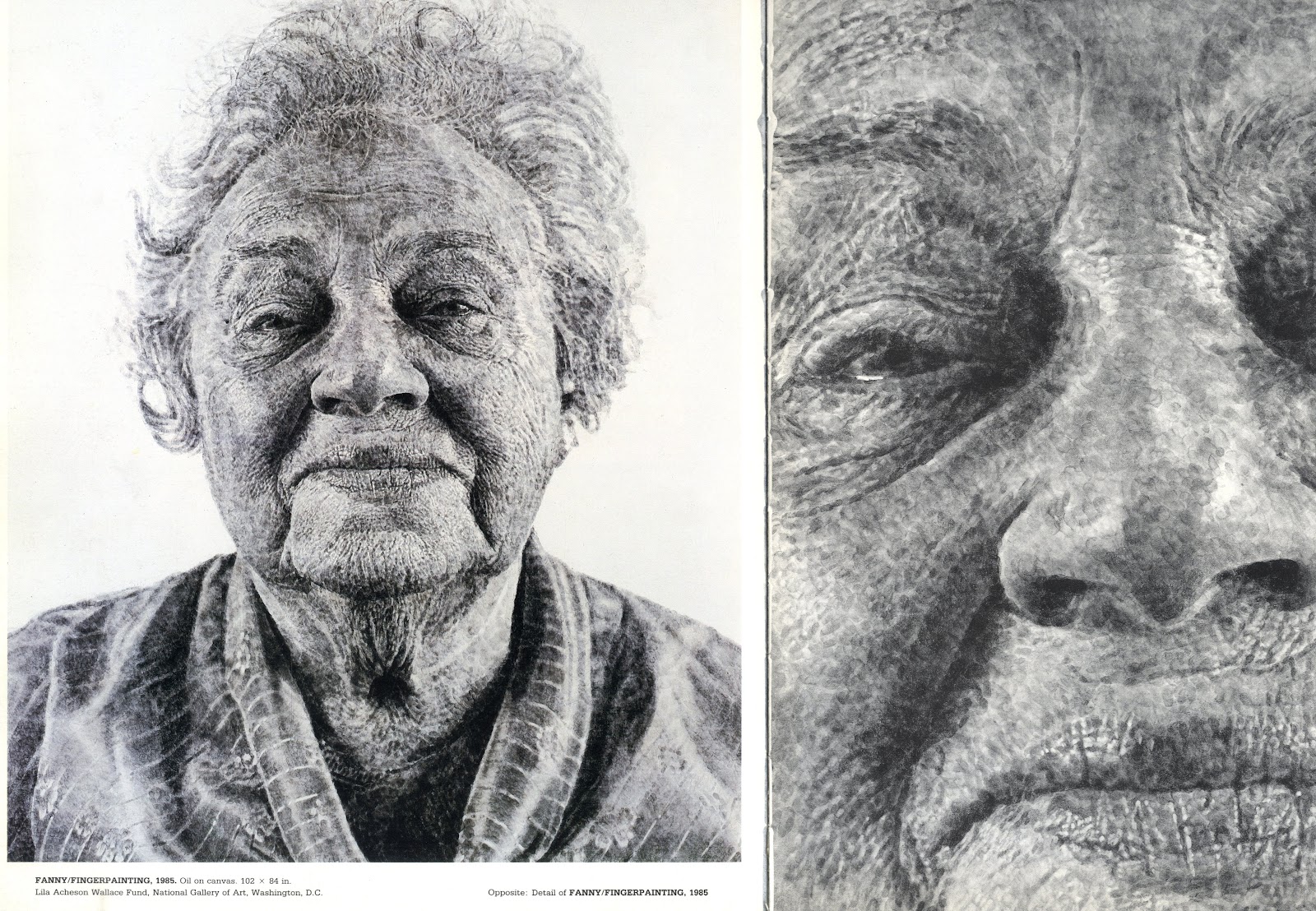 Close is a man who keenly understands procedural art; his portrait of his friend Roy Liechtenstein (below), is as algorithmic as anything you’ll see in this CS course. Check out this astounding time-lapse, in which a group of workers accrete more than 40 different colors of paper pulp through specially-cut stencils:

Whereas Chuck Close’s colored square-circle self-portrait suggests a translation strategy of direct pixel-for-paint substitution, his “Fanny” portrait suggests an altogether different strategy, in which values are rendered through the accumulation (or massing) of marks in different densities. In a word: more thumbprints = darker. We will see both of these visual strategies in the works of computational new-media artists, below.

Primary among these is New York-based artist Danny Rozin, who for nearly two decades has been exploring “physicalized” custom pixels. His 1999 “Wooden Mirror” is widely considered a classic work of new media art; it consists of 840 pieces of wood which tilt toward or away from an overhead light. This is the “substitution” strategy; Rozin directly maps each (camera) pixel’s brightness to the orientation angle of a servo motor. Brightness = angle. 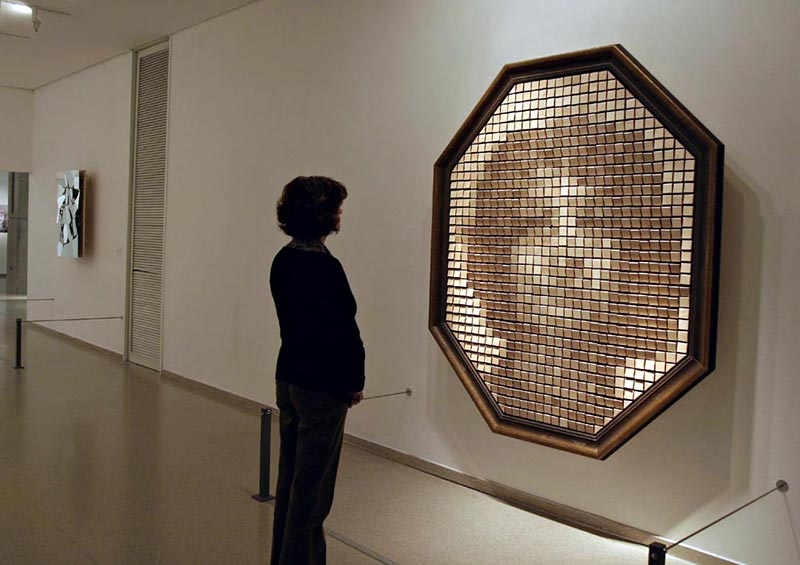 His “Peg Mirror” (2007) likewise rotates 650 cylindrical elements towards or away from the light:

Rozin’s “Weave Mirror” creates an image by rotating interlocking elements, whose exteriors are colored with a gradient from light to dark.

Ryan Alexander allows fungus-like filaments to grow according to forces from an underlying image. It turns out that those filaments are actually strings of words. 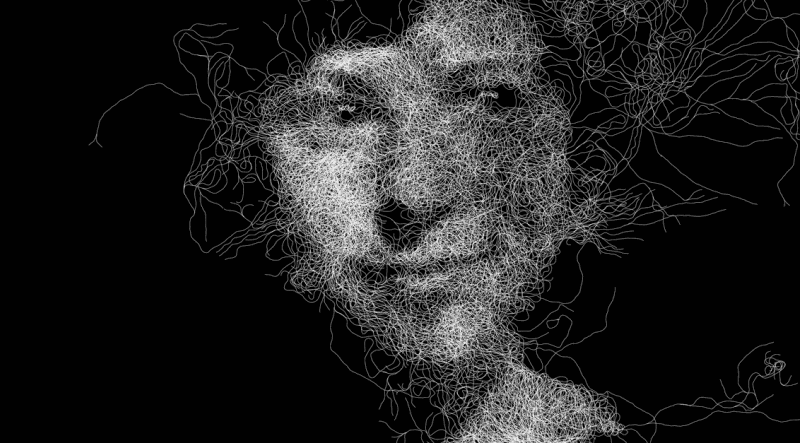 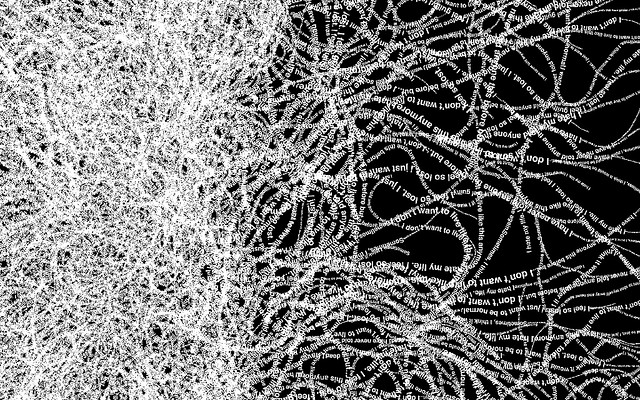 In the work below by Robert Hodgin, 25,000 dots recreate a portrait by Rembrandt Peale. According to Hodgin, “Each dot pushes away its neighbors. The strength at which the dot repulses and the radius of the dot are both governed by a source greyscale photo.” 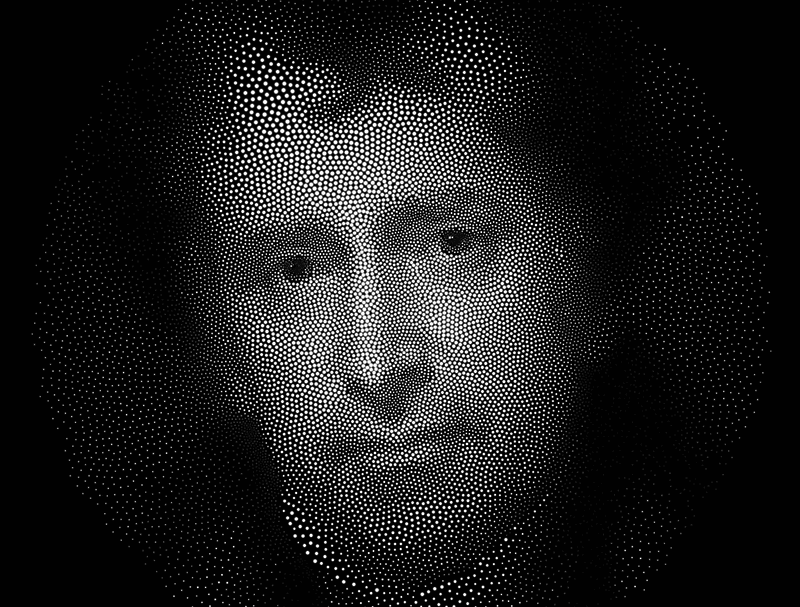 We see the massing or density-based strategy once again in the portraits below, each of which consist entirely of just a single line! These are examples of so-called “TSP art”, in which an algorithm which solves the well-known Traveling Salesman Problem algorithm is applied to a set of points whose density is based on the darkness of the image. On the left is a self-portrait by Mark Bruce made with StippleGen; on the right is a portrait of Paul Erdős by Robert Bosch. (Click to enlarge.)

Below is a computational self-portrait of Dan Shiffman. 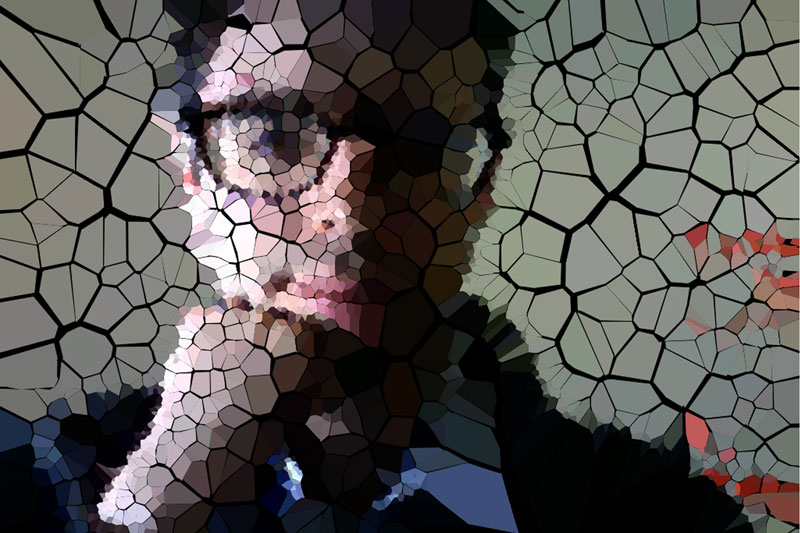 In this interactive dance performance by Camille Utterback, the space between the performers is filled with colors derived from their bodies and movements. 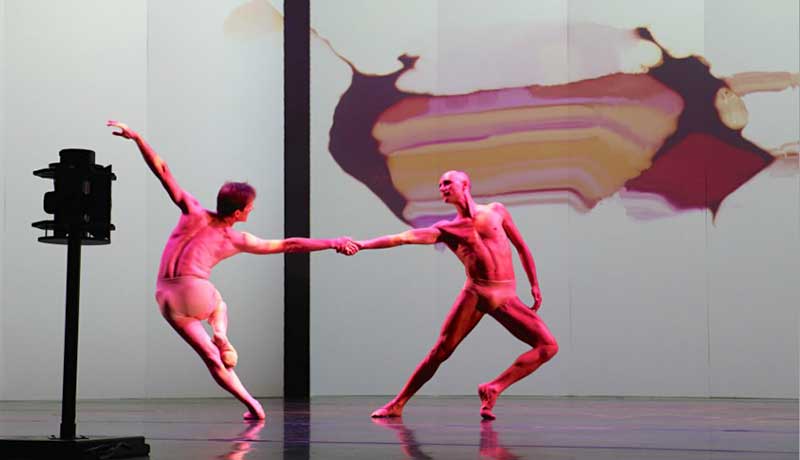 The use of dynamism to resynthesize photographic imagery is another important visual strategy. In this self-portrait from 2007, Robert Hodgin uses “a 3D flowfield to control [moving] particles that pick up their color based on webcam input.” In essence: moving particles pick up color, and shmear it, as they move around on top of an underlying photo. 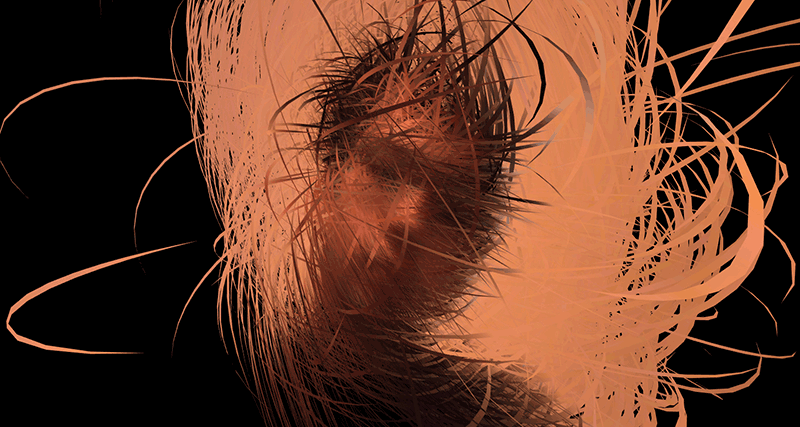 Ok, enough already. In this Project, you will create a computational portrait, rendering data from a (hidden) photograph with a “custom pixel” or other original algorithmic graphical treatment.

We hope the above examples are stimulating, and as usual, we hesitate to provide sample code. Still, it’s helpful to know how to set up an image for algorithmic interpretation. We highly recommend you look at Dan Shiffman’s great p5.js Pointillism Example. Here also is Golan’s simple self-portrait, composed of random dots and mouse-drawn lines:

Here are the Project-08 Requirements: