I will be collaborating with Thomas Wrabetz for the final project. We want to make a “Maze of Inspiration” game-like program. The person running the program will use the arrow keys to move a small circle through randomly generated pathways in a maze-like formation. During their travels, they will come across other dots, which they can collide with to generate “inspirational quotes”. In order to create the quotes, we will first collect a lot of inspirational quotes and then break them down into separate parts of speech and sentence format. The sentence format will be randomized, and then filled with various random parts of speech.

If we have extra time, we could try to make the program more visually pleasing. We might hang inspirational posters on the walls of the pathways or use representations other than dots. We could also make it more game-like by having a start screen or allowing the player to escape the maze after a certain amount of time has passed or they have generated a certain number of quotes. See illustrations below for early-stage visualizations. 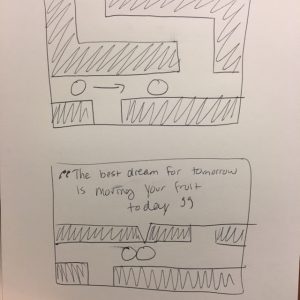