Since this code has sounds, the WordPress account doesn’t display it properly. Above is a link to the p5.js alpha editor where you can properly view my code. Once at the website click the play button on the top left corner of the screen

My project looked at combining motion graphics and sounds. I wanted the graphics to work such that more was revealed as you moved around the canvas – everything is made out of two colours so as the mouse moves in the horizontal direction, you get to view more of the graphics as a differentiation is created between the background and the actual graphics.

I had an issue with running the local server on my laptop so I used the oscillation program from p5.js to get a sine curve amplitude and frequency to create a sound that my motion graphics responded to. The larger objects respond to the sound that is generated. The rippling, striped circle responds to the silence in between the beep noises. The white ellipse curve is its own thing that just renders what a traditional sine curve looks like.

When the canvas is clicked on, the noise stops and the motion graphics continue. To restart the noise you have to refresh the page. 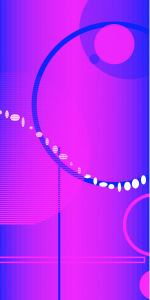