For my final project, I want to make an interactive game so for my Looking Outwards, I researched the top games on market for inspiration.

For the first project of my Looking Outwards report, I researched the game Rider. I think Rider is a great source of inspiration for my project because the obstacle changes every round, every level, and as the car moves throughout the track. The player has to face new challenges each frame. I really admire this game’s interaction with the human because it creates a frustrating, but ultimately entertaining experience. This game was released by the company, Ketchapp, in July of 2017. 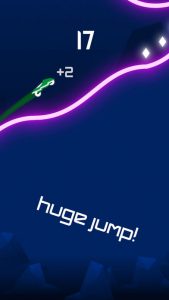 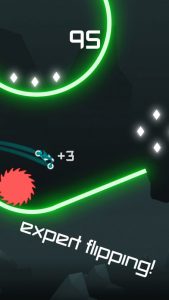 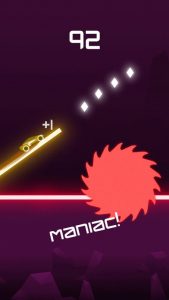 Caption: Above are some screenshots from the game, Rider.

The second project I chose for my Looking Outwards is Monument Valley. Monument Valley runs a player, princess Ida, through mazes of optical illusions and “sacred geometry”, which refers to impossible objects. The player goes through the mazes and finds hidden passages  while in pursuit of the map’s exit. The player must overcome moving platforms, pillars, or spontaneous bridges. Monument Valley was developed by Ustwo, a digital design firm, and was officially released in 2014. Again, I think game is an excellent source of inspiration because the landscape changes continuously and gives the user a surprise edge to face. In addition, I really admire this project’s design and visual graphics. In fact, it was awarded as the Apple Game of the Year and Design Award in 2014. 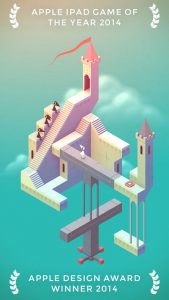 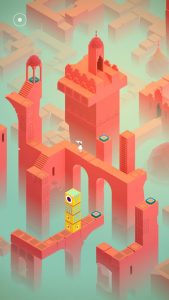 Caption: Above are screenshots from different levels in Monument Valley.

Created by James Paterson, Norman is an open-source WebVR tool to create frame-by-frame animations in 3D. Drawing inspiration and building on the work from Rhonda (2004/05), James turned to WebVR to build the tool in Javascript that runs in a web browser and lets him animate naturally in 3D using VR controllers.

Created by Matthias Dörfelt, ‘Block Bills’ is a series of 64 banknotes generated from the Bitcoin Blockchain. Each banknote represents one block in the chain and the whole series consist of 64 consecutive blocks starting at block

I was attracted by these two work at the first sight. For the first one, I like it because I think using coding to do animation is very interesting and it is something that I have wanted to do for a long time. The animation is interactive for audience because it is not static. Also, the storyline also attracts the audience. It even uses VR to interact with the audience, which makes it more interactive. For the second work, the quality of the design impressed me. I like the design for just a bill using coding. I like how the author uses simple coding to generate or compose a such abstract design of a bill.  This work is very aesthetic, but I think it can be more interactive. I know it is a design for bill, which is static, but it will be fun if it is an animation.

For my final project, I want to make an interactive game inspired by Super Mario. The game will feature a penguin in which will travel throughout levels, avoiding obstacles and battling big predators, such as sharks. In addition, I am still thinking of ways I could make it educational. The penguin will be controlled by user inputs such as mouse pressed, dragged, or key pressed. The penguin will travel through an ever changing generative landscape, getting harder with each level. I also want to add a sound effect to accompany the actions.

Caption: Above, I created a model that will help me consolidate my thoughts. The model details different touch points, where the user interacts, throughout the game.   These interactions includes picking a player, jumping, slide on the belly, or fights. 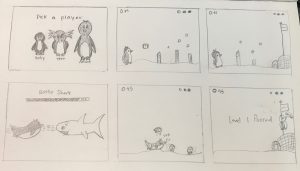 Caption: Above, I created a storyboard that helped me visualize my game concept. Each frame illustrates a different human interaction throughout the game.

Yen’s work features a combination of processing, PBox2D, and Geomerative, where he creates a program that draws fritzy letters that react to user key input. The letters he creates also dance to the rhythm of the music. I really enjoy the fun nature of his work and would love to incorporate forms of user input in my own project. An interesting opportunity would be for them to play with color and orientation of letters more, which would have made for a more dynamic interaction.

Sasj is a dutch interaction visual designer that posts geometric animations daily. She uses processing and enjoys working with geometric forms — multiplying, dividing and colliding them. The animations she creates run on their own pace with no user input.

The differences between her work and Yen’s are the control over user input, along with the type of sensory experience you would expect to have — Sasj’s may be more visual, whereas Yen’s may be both visual and auditory. This may be an opportunity Sasj could have investigated in — incorporating input or sound into her work to make it more dynamic.

For my final project, my partner and I have decided to create a series of animations that are time sensitive every day activities. We also wanted also have it as a very colorful vibrant, colorful and cartoonish style to make it fun for the user to see. We also wanted to incorporate involvement of the audience with the animation. Some examples of animations we wanted to make is like cooking an egg, making toast, baking a cake. Below are some inspirations and drafts of our ideas.

The first project that I have chosen to write about is “I want You to Want Me” by Jonathan Harris. It was created in 2008 and was installed in the Museum of Modern art during valentines day on 2008. It is an interactive exhibit where every balloon is a unique dating profile/story where the user can choose which story/profile to view as well as the background of the display. I Want You To Want Me aims to be a mirror, in which people see reflections of themselves as they glimpse the lives of others. Below is the link to the project.
Link to project 1

The second project that I have chosen to write about is Oily Stratum by Jared Tarbell. It was created in February 2003. It is a simple animation that is based on the laws of physics and tries to describe how to merge irregular objects based on cohesion and globual size.

The two projects are similar in that they both abide by certain physical rules, one is more based on data that is unrelated to physical rules while the other is based on physical properties, which is impressive.

For my final project, I am carrying out an individual project of a simple game inspired by the app, Tower Stack. Instead of a swaying crane, my game will utilize horizontal movement with varying speeds for my refreshing/’feeding’ building block. Players can use mouse click to release the building block, stacking them as tall as possible. The stacked tower also moves down and out of the canvas by the second, creating some time pressure on the player to stack blocks efficiently.

Project Proposal
For our final project, we were inspired by simple graphical illustrations of everyday moments – specifically in food handling activities. We want to create clickable interactions that prompt user input. For example, a scene may be pancake making, and the user would have to consider an image of its ‘ideal state’ in the top left corner while considering the timer on the screen, in determining when is the best time to flip the pancake. These interactions hope to create simple, satisfying moments for users when they are able to achieve its ideal scenario. These interactions will also mostly surround kitchen activities from pouring the perfect amount of coffee, baking a cake, etc.

For the final project, I decided to take a launch pad idea and apply it to the keyboard and linking movements and visual representation to the sound and key when pressed. I plan to have a general beat looping in the background, which hopefully the users on the page have the option to toggle between a couple of them, and keying sounds to specific keyboard buttons. The visual response for each key would be inspired by its corresponding sound. I also plan to implement an abstracted terrain of “asteroids” that will be flying pass the Canvas.

My proposed project has to do randomness that generates relationships between lines, fills, and typography. The first project I was inspired by was Matthias Dörfelt’s Marcel’s Fountains. Simply, it is a series of Marcel Duchamp’s famous fountain, but the interesting part is that the slight variety computer generated. The work is simple but cute and calm to observe the subtle differences between each drawing. The subject selected for the drawing is also eye catching. I imagine the process is similar to the variable face project a while back. The work doesn’t have any interactivity, probably purposefully so, as it is presented with ink on paper. 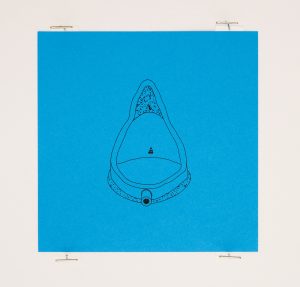 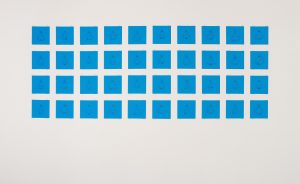 Another piece I’m inspired by are posters by KAZUHIRO AIHARA or “SHUNTO-SHA”. Japanese graphic artists tend to create custom typeface for their work (Japanese typefaces are difficult to create and there aren’t many off the shelf), and his work exemplifies this point. There is a sense of randomness and flow of type between the lines and fills in his compositions. Again, his work is static and non interactive. For both of these, I think exploring interactivity and motion would be worthwhile.

This experiment lets you play your keyboard like an instrument to overlay colors and images to create your own music video, and I am interested in creating an unique experience to a short video.

The second example provides mouse interaction of the user on the page to generate music. GeoSound is a webpage By Yanlin Ma that generates sound through geometric object collision. It provides an interesting way to allow people to make sound and contribute to the sound they are experiencing.