Rudimentary video animation of our project.

My partner, Miranda Luong, and I plan on doing an audiovisual performance visualization for our final project. Interested in the dynamic capabilities of static design, our project will oscillate simple geometric shapes to visualize sound waves in music.

We were heavily inspired by Swiss Design, a time in design where strong geometry was utilized to create interplay between form and content. To break down our proposal for this project, our source audio will be represented by a singular circle placed in the midst of triangles and quadrilaterals. This circle will change in scale in accordance to the intensity of beats and the outside shapes will change as well. We imagined ripples, created by water droplets as an inspiration.  We wanted our visual display to suggest a connection between the source audio and its environment. We will explore the communicative capabilities of flat imagery and test our own abilities to visually communicate music.

For my final project, I want to mimic the effect of a book I read in elementary school called Zoom by Istvan Banyai. The book is composed of several landscapes that zoom out as each page is turned. As a result, the zoom outs continually cause shifts in perspective and allow readers to embark on a journey through several different landscapes and environments. With each zoom out, I plan to incorporate animations within each landscape that reflect the environment. For example, I will incorporate elements of gravity and physics to make the landscapes seem more realistic. I will also make my project interactive by allowing the user to click on a “zoom out” button that will show a new, zoomed out landscape. I also plan to incorporate elements of randomness in the landscapes so that the users will have a different experience every time they interact with the project. While I am unsure of how many frames I will incorporate, I hope to create the same effect the book gives off with each zoom out.

My plan for the final project is to create an interactive software that guides the user through the timeline of humanity’s exploration of the moon.

The canvas would start with a white circle that represents the moon and smaller circles surrounding it that represent stars. Each of the stars serves as a milestone in moon exploration. I plan to include 20-25 events from a source at space.com.

When the user clicks a star, the year and description text of the first event will appear to the right. Some amount of random chords will also appear on the moon. When the user clicks another star, the first star will be connected by a line, the second event will be displayed, and more chords will randomly appear on the moon. At the end of the timeline, the moon will appear grey and spherical as a result of overlapping chords and all the stars will be connected. 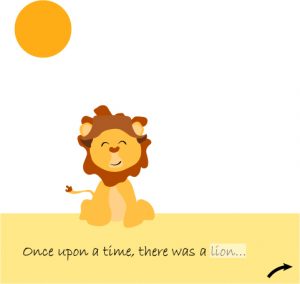 The story is about a lion who is a farmer and his plants are dying in the hot sun so he needs to figure out how to make it rain. After interacting with a few other animals, he finally realizes he has to dance to make it rain (subject to change!)

I believe this project will help me learn more about interactivity and animation within p5.js. I am excited to see how this process goes!

For the final project, I would like to do an animation with sound. I wasn’t sure what kind of animation I wanted to do, but I am deciding between my routine/ritual or a short animation of a film that I really like. I would start the canvas with a white background and have a title that shows up through a darker opacity after ‘x’ amount of seconds. And then, the animation would start. I would like to have my character exactly in the middle and having the background/foreground move around her. To make different backgrounds of the animation, I would have a start time and an end time for each background and the objects in the background/foreground. To make this project all flow together, I would like to digitally draw the characters using a style that I like.

The image above is what I would imagine my animation to be like. The link to the animation is here.

For my final project, I want to make some form of a simple, but well-crafted audio sequencer— a tool where someone can compose simple music and have it played back to them. I want to utilize animations per moment of ‘collision’ for each part— in order to connect both the visual and auditory. So in some ways, this is like an audio-visualizer, but in this case, people will get to produce their own simple compositions!

For my final project I’d really like to make some kind of relaxing game. I think this would be a nice opportunity to make a game which I really want to do as well as make it look appealing visually. In this vein, I thought about making some kind of cute little gardening game. The player would be able to choose what seeds to plant and water them by clicking. There could be random events like weather or animals coming to visit. Different plants’ properties would be stored in objects. I think this idea is something I’d enjoy working on as well as something that I will hopefully be proud to show off when I’m done!

For my project, I’m planning to do some kind of interactive, generative audio visualization. My most concrete idea as of now is to create a field of particles in WEBGL, with each particle having a sine wave of a random frequency embedded in it. Users would be able to “look around” the viewing field with orbit control, hover over a particle to hear its pitch, and click and drag between particles to form “links.” Linked particles would emit their pitches, allowing the user to build “constellations” of harmonies. I want the particles to feel dynamic and alive, so I’ll probably implement some sort of noise into their movement, as well as create reactive interactions, such as glowing when a mouse is over a particle, or when a particle is linked. This idea will probably require the use of objects, which are one of my weak points. Hopefully, completing this project will strengthen my familiarity with objects. I’m also almost completely unfamiliar with WEBGL, but I’ve been interested in it for a while, so this will be a good opportunity to explore it. 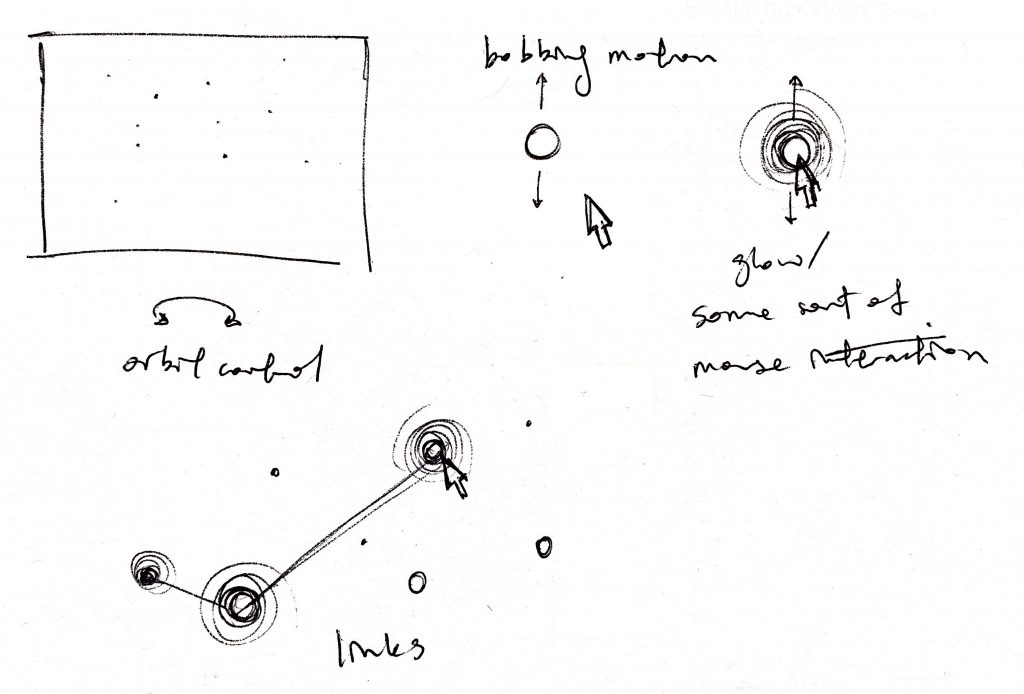 If I have time, I’d want to take this idea further and try to gamify it in some way, as well as add more recognizable visuals into it (for example, have the particles be a night sky above a hill).

For this project, we (Elena Deng and Dani Delgado) wanted to collaborate and create something that synthesizes user interaction, sound, and generative visuals in order to create an interesting digital experience. Our plan is to start by displaying a still image (we are thinking of it being a graphic cube but are currently entertaining other possibilities) which changes a little bit when the user presses certain keys. The whole interaction would work as so: Each key has an assigned sound and “cube distortion” to it. So, when the user presses a key, a note will play and the visual will change slightly, so that when the user plays a full “song” the visual would have morphed a lot. A possible idea we had was with lower pitches the visual could retain the change that the lower pitch enacted, while with a higher pitch, the visual would go back to its original state before the key was enacted. 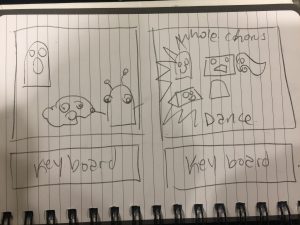