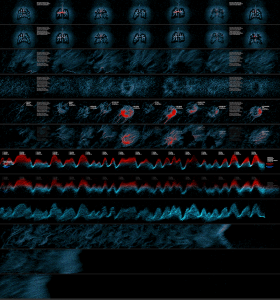 The artists vsualzied three data about people’s lives in New York into some public posters. I admire the project because the artists are giving the art and design fields new definition which inspire people to rethink of their daily lives. The artists using Python, PHP, MySQL and other tools to generate data, but they did not stop with those bunch of data, they rearrange the data and make them present in a more visual way. They used color contrast, density contrast and waves to indicate the change on the flow of people, data and environmental factors over time, and finally present these visualized data to public using large posters. In this way, people are getting more aware of the their daily lives, and things happened around them. By looking at things from a god view, the invisible trend and subtle changes become visible, making people to realize or know more about who they are and what they are doing. That is part of the main goal of art and design: to inspire and invoke people to something that are being ignored. 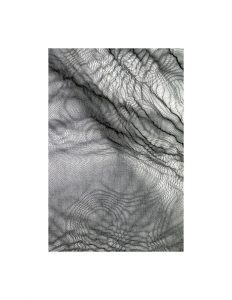 I appreciate the amount of complexity and depth Jean Pierre Hebert was able to achieve in his piece “olive branch,” completed in 1990 utilizing a single drawing instrument and line weight. Hebert, an Algorist and pioneer of digital art, programs printing devices such as custom-built devices and plotters using computer codes he has developed himself to produce incredibly detailed drawings such as this one. By combining programming languages and simple mathematics, he successfully bridges both digital and analog mediums in a way that transforms how we think about art. Overall, it easy to hypothesize how his method of creating artwork has greatly influenced digital art practices in use today. 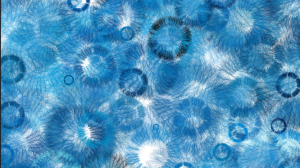 This work is from Australian Artist Lia. Her work combines the traditional drawing styles and digital techniques and aesthetics. The reason I appreciate her work is that I believe modern art needs to be understood and appreciated by the public. Abstraction is not working well to connect with the audiences.

This work is created for Fabasoft website themes. Through a series, she tries to convey themes of Serenity, Trust and Respect. Her work however, contains some concrete patterns–dandelion in this work. And the texture of color pencil and feather-like strokes can be felt vividly. I feel peacefulness and harmony for consistency in color and non-edge shapes. Variation exists in size of the shape and brightness of the color.

Above this text is a video project titled “Sun,” made and published by Robert Hodgin in 2015. Among several other animation projects he’s done, this video was made using Cinder, which is a “C++ library for programming with aesthetic intent – the sort of development often called creative coding,” encompassing various domains like “graphics, audio, video, and computational geometry,” as described on its homepage.

This coding service is peer-reviewed and apparently free, which compounds with my surprise that sophisticated coding purely for the sake of artistic visuals, rather than the application of such, existed. From the looks of Hodgin’s other projects, Cinder is vastly diverse in its aesthetic capabilities, ranging from displaying – in Hodgin’s case – a school of fish, taxi routes in a city, spectacles in space, and particles flowing in space as if carried by an air current.

Hodgin’s “Sun” project caught my eye in particular, for its theme and because, with my current knowledge of coding, its animation is the one I find simplest to understand. Two celestial bodies, one (presumably the Earth) orbiting its gargantuan counterpart spinning in place, and that’s all.

Aesthetically speaking, I appreciate all the small details added to the Sun to make it feel organic rather than procedurally generated, as well as the fact that, being the largest thing on the screen, it takes up the vast majority of the viewer’s attention. Additionally, the comparatively tiny and featureless Earth revolving around the Sun add to the overwhelming presence of the latter body. An effect the author achieved with naught but a tiny moving black circle.

Below is a link to additional projects that Robert Hodgin has done:

Turbulence by Dr.Woohoo is an interesting piece since it combines the use watercolor, which is visually organic, and a robotic arm to create a precise and organic piece. I admire the artist’s desire to push the boundaries of basic mechanical systems to revolutionize traditional forms of art. I think it is a noble ambition since it provides traditional art a means to escape its own boundaries. I think the wonderful thing about are is the infinite creative ways artist can utilize the same mediums. Dr. Woohoo’s use of mechanics, increases the amount of possibilities for which these mediums could be used. The algorithm behind Turbulence, appears to be pretty simple. The machine draws simple patterns while filling up on paint when needed. I would like to know if the layout of these simple patterns are randomized or not.  Dr.Woohoo was the directly behind the design the mechanical arm was to draw. He was able to manifest his own sensibilities with various factors out of the arms control like: color, color overlap, and layering. He was also able to ensure that the pattern being drawn would evolve into a hive-like pattern.

This is a work by Alex Dragulescu. He created an algorithm that took apart computer viruses and identified their habits, grouping and growing tendencies, and patterns. Using these patterns, he created three dimensional forms. I like this work because it makes a computer virus seem like an actual mutated cell from a human virus. The floral, spiraling form  of the trojan virus pictured below has both beautiful and grotesque aspects to it, for a beautiful piece of code that is used for a grotesque purpose. 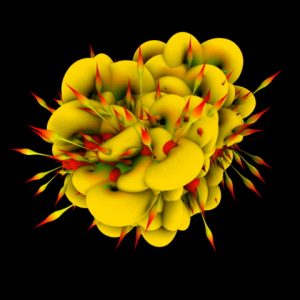 It is very enlightening to see an art project based on nature. This project is based on an ongoing research by artist Rihards Vitols. His ambition lies with replacing some bird species with artificial ones so that in case the bird population reduces, the artificial birds can still help maintain a natural forest balance. The project is based on science. Vitols tried to use his woodpeckers to understand the communication among trees, insects, and woodpeckers. For now, the project is still pretty vague. But the idea of having backup artificial birds to maintain an ecosystem balance is very impressive and practical. The design of the artificial also looks vintage and natural, there is a woodpecker carving on each of the woodpeckers which makes the design natural and artsy. 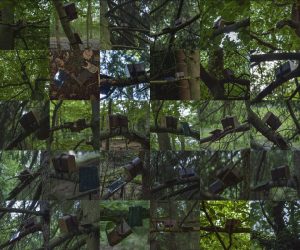 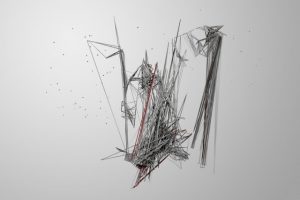 The Forms project is an interactive video installation exhibited at National Media Museums, a collaborative work by Memo Akten and Quayola. It explored the invisible relationships of “power, balance and conflict” between human’s body movement, especially the one of the athlete. The abstraction of forms and visual elements came from live footage, and without specification, I suppose that the algorithm takes in change in position, speed and sound of the athletes and generates artistic elements based on these data.
I found it particularly interesting because it transformed, or rather materialized the invisible trajectory, strength and even energy of instant movements, into highly artistic and articulated mechanical forms, something more palpable.
I think the project took an interesting approach in representation. Not only were the sound and graphic elements embodiment of vibrant movement, but the competitive and challenging athletic performance became easier and more interesting for people to appreciate and understand. 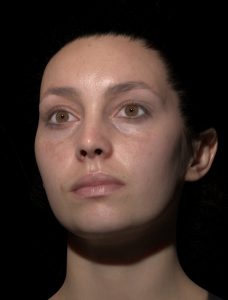 The Digital Human League’s Wikihuman project is an extensive collaborative effort to create realistic looking digital humans. As someone with a fine arts and theatre background and a large appreciation for Disney, the potential of digital actors both excites and frightens me. The Wikihuman project takes scans of people’s faces and then those scans are turned into various maps: diffuse, single scatter, specular, and displacement to name a few. The maps are then complied into one compound image using Autodesk’s Maya. The finished image, a head, then follows the mouse on the screen turning from side to side and looking up and down.

I don’t know how the program works, but I assume that it has to take the input from the mouse and then construct the newly exposed portion of the face. I like the potential for CGI that the Wikihumans project creates. While CGI is widely utilized in movies, the digital actor opens up new possibilities for bridging the world between animation and real life. François Morellet
Random Distribution of 40,000 Squares Using the Odd and Even Numbers of a Telephone Directory
1960

Morellet created this work with a simple physical algorithm. He divided the canvas into a giant grid, and colored the squares on the grid red or blue based on the numbers his wife read to him aloud from a phone book. This work captures Morellet’s interest in the iterative, and the random, and especially his interest in combining scientific/numerical processes with art.