This week, I’ll be looking outward to Puppet Parade, an interactive exhibit produced in part by Emily Gobeille in 2011.  Emily is an artist and designer who focuses on building interactive exhibits that encourage play and she’s a co-founder of Design I/O, a creative studio specializing in the creation of interactive installations.

In Puppet Parade, visitors control one of two giant projected puppets by moving their arm as if it were the puppet.  By moving the puppet, the puppeteer can eat different colored blocks to change the colors of their puppet or make funny poses.  The puppeteer’s arm is tracked using an XBox Kinect, but custom software was developed to distinguish the different parts of the arm. 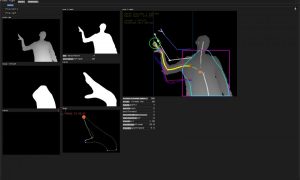 What I find inspiring about this project is how the actions of one or two “players” are able to create an entire area of interactivity, expanding the space and amount of people that can partake in an experience.