GLASS II, by The Mediated Matter Group at MIT Media Labs, is a series of 3d-printed glass columns, each internally lit to produce “kaleidoscope-like patterns” of light and shadow. Each column was generated with a different shape, determined both by how the characteristics of the shape affected light passing through it and the limitations of the 3d-printing system itself. The internal lighting within each column also moved up and down, creating dynamic patterns of light projected onto the floors and walls of the exhibit.

I was initially drawn to the project because of its unusual production method: generative forms aside, figuring out how to 3d-print glass is a feat in itself. I also admire how the installation itself didn’t just rely on the 3d-printed material, but also incorporated light and how the material affected it.

Recently, Iris van Herpen had a show in the Carnegie Museum of art featuring a variety of futuristic looking, digitally fabricated fashion.
She is a fashion designer that wishes to marry code and fashion to create non-traditional clothing that seems to combat how we feel clothing should act and look in a wonderfully sci-fi way. She utilizes programming and code to 3-d print designs that seem to defy gravity and what we generally believe to be achievable in terms of physical form. The flexibility of the clothing itself comes from how it is printed; Iris used Stratasy’s Object Connex multi-material 3-d printer which allows for many different physical properties such as hardness/softness and movability to be built into the clothing item. Code controls what would otherwise be carefully carried out hand-embroidery and weaving/needlework, speaking to the endless possibilities ahead. Much of the pieces also completely eliminate seams and cuts, creating smooth, form-fitting architectural pieces of clothing through the delicate weaving and layering commanded by the code. The pictures really speak for themselves in this case, and it’s much more clear/easy to just show as opposed to trying to explain the strange phenomenon she creates visually with her coded clothing… 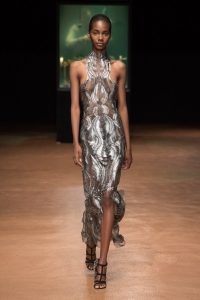 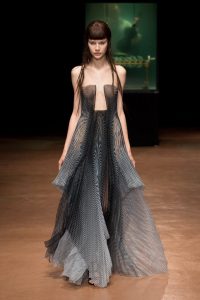 Jewelry can be created through several different forms of arts and devices; however, these pieces of jewelry seen in the photo above were made through 3D printing! I find this incredibly fascinating because I’ve seen many designers and inventors create things such as the Voxel Chair, but I’ve never seen 3D printing used in such a way for fashion. These pieces of jewelry were made by Theresa Burger from Morpheus. There is no specific date or title for these pieces of rings and earrings since Morpheus custom manufactures jewelry based on their client’s needs and wants. These small seashell design based earrings show only a small glimpse what Morpheus’s designers can create. I admire the fact that these designers are learning how to incorporate new machines and tools such as the 3D printers to generate new and different types of fashion into the industry.