Eva Shindling’s “Liquid Sound” uses recordings of words that are considered opposites such as body and mind, chaos and order, simplicity and complexity, and uses the sound vibrations from these recordings to manipulate liquid simulation. Eva then takes a freeze image of the effects of the vibrations on the liquid and turns it into a 3d sculpture. I love the train of thought that goes into making a piece of work like this. It quickly points to the fact that opposites can also blend into each other and that there is an asymmetry and deformity to the relationships between these words. The sculptures make me think about how opposites affect each other and that this binary way of thinking isn’t cut and dry. There are nuances to the meanings and associations with these words that I think are really interesting to see visually depicted. I really admire Eva’s workflow and the layers of process that go into making work like this. You can feel the process and loss of a simple definition in the passing of time it takes to make these pieces.  http://www.evsc.net/home/liquid-sound-collision 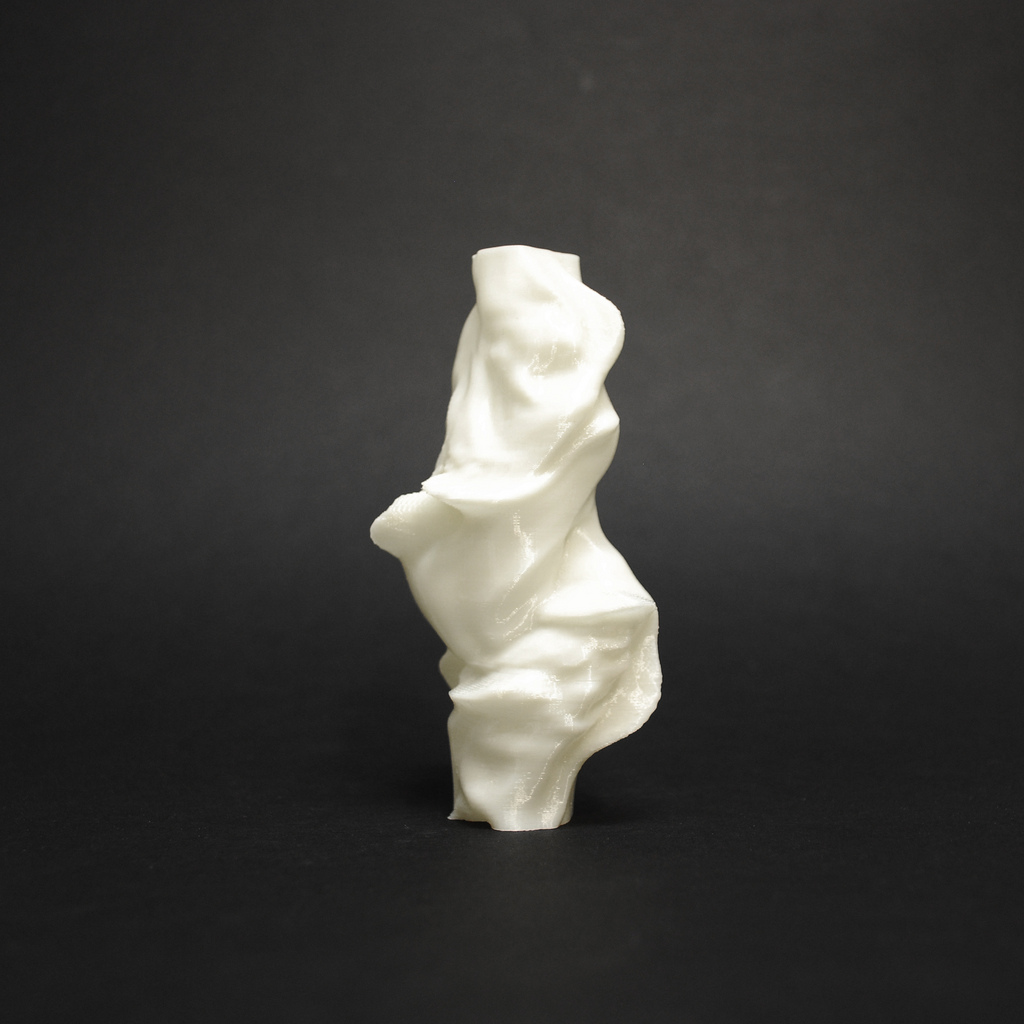 This week for my Looking Outwards, I looked at a project called Neurotiq by Sensoree. Sensoree began as a research endeavor focused on creating wearable technologies that augment Sensory Processing Disorder. Now, Sensoree Design Labs represents a cohort of designers and engineers that work with futuristic fabrics and materials.

Sensoree’s founder is Kristin Neidlinger, who is also a future concepts designer. I appreciated that this week’s Looking Outwards was directed at highlighting the amazing things that female creators are making.

Now, back to talking about Neurotiq. Neurotiq is a wearable piece of fashion that was knitted and 3D printed. It has EEG brain sensors that reflects the wearer’s thoughts and brain states, and it does so with colors. The EEG brain sensor captures brain waves. Neurotiq perfectly captures the bridge between science and art, as it is both beautiful and functional. Something that made me especially happy with this week’s Looking Outwards was that Sensoree had a process video for Neurotiq available, which is information that I have generally found difficult to obtain for past posts. The process video is below:

Here is a video of Neurotiq in action:

Chloe Varelidi is an indie game designer and developer. One of her projects, Pandemoji, is “a silly classroom game which uses a webcam and face recognition software to provide a playful opportunity for tweens to talk about their emotions.”

Her code is located here. The way the game works is a person stands in front of a webcam and watches “Pandemojis” (which are exactly what they sound like: panda emojis) fall from above. They then move and “catch” one to wear on their (virtual) face. A countdown is given and then a screenshot is taken. The goal of this is for the images to later be used in a classroom discussion of emotions and specifically how we express emotions through our facial expressions.

The person whose work I am writing about is Chloe Varelidi. She has a Master’s in Fine Arts at Parsons’ Design and Technology Program. Currently she works at littleBits as a Sr. Product Strategist, and is also a resident artist at Eyebeam, making her own games.

The littleBits Analog Arcade Machine, for the 2015 Bay Area MakerFaire, presented by Kristin Salomon, Paul Rothman, and their littleBits team, of which Varelidi was a member.

The team’s projects include an arcade game that dispenses candy, an electronic drum module creating synth beats, and even an animatronic hand project that allows for games of rock-paper-scissors with a computer using one’s own hand in a glove with a wireless receiver. According to the presenters, the modules are assembled with bits (hence the name) which challenge the creators’ creative electrical engineering skills without being overly complicated, at least in terms of assembly.

The rock-paper-scissors game I find particularly interesting because of the many touches to help simulate a real game, such as using one’s own hand, having the opposing animatronic shaped like a hand, and simulating prediction of your move by detecting the subtle movements of your hand as you play.

Lorna, 1984, by Lynn Hershman Leeson, was a pioneering work in interactive video art. Participants controlled the actions of an agoraphobic woman named Lorna, and could observe and influence the details of her life through the videodisk interface. I like the piece because I find it a little unsettling, early video art tends to have that effect, and Lorna accentuates this by creating a sense of voyeurism. I find the multiple endings to the piece interesting as well: Lorna can either destroy the television set, commit suicide, or move to Los Angeles, a set of options which ranges from amusingly strange to profoundly upsetting.
Lynn Hershman Leeson is a famous creator of all sorts of art, but she’s mainly known for art with a focus on the interactive, she’s one of the progenitors of the entire field. Her work focuses on the relationship between watching and being watched, and also on the issue of women’s rights: many of her films and art pieces are about the struggles women face in the art world and in the world at large. She works in both San Francisco and New York City.

Lorna, and her other work, can be found here.

LIA’s project “Elements an Android Experiment” is a very interesting application that she developed for Android. It takes what the device can see through its camera, and creates an entirely unique pattern on the screen of the device. Each time the camera shifts, the pattern changes. I really admire the way that this makes art portable, and in the hands of any user. Through it is the artist herself that makes this experience possible, it gives the viewer agency, and the ability to look at the world through a new perspective.

I couldn’t find where LIA studied, or what specifically she studied, but her CV does say that she lives and works in Vienna, and has been producing work since 1995. Her work consists of programming, and she identifies her medium as “code.” She uses programming as a way to let the viewer experience her art on a “subconscious” level.

Loop.ph is a studio based in London and was created by Mathias Gmachl and Rachel Wingfield. This studio focuses on architecture, design, and other sciences. They try and connect reality, the virtual, and the future. One of the projects that I was looking at that they did was very interesting to say that least. They built a small bicycle course that had lights implanted on the course to represent something bigger. The course was supposed to be a way to celebrate the relationship between Taipei and the importance of healthy living styles. Going deeper into the description of the project (found HERE), you can see how they were trying to connect the structure of course to how lungs are structured while the cycling can represent air quality and its effect on the lungs. I cannot do it justice by explaining it here so click on the link to read more.

Rachel Wingfield is a researcher and a designer who trained at the Royal College of Art in London. She works on a lot of environmental and living systems related projects.

I really liked this project because I think it is important to educate people on their environment and how it affects their body. Rachel and her partner just found a really cool way to do it!

As Virtual Reality technologies become more and more developed, many artists have turned to this new form of media as the canvas for their creation. Milica Zec is among the rising new artists in this field. Earlier in 2016, she debuted as a director at Sundance Film Festival New Frontier with a short piece, “Giant“, which is about a family struggling to survive in an active war zone.

I really look forward to seeing more works of Zec, not only as a Virtual Reality Director, but also as a voice from a woman, of women.

Today I am going to dive into the work of Kristin Neidinger who is an augmented fashion designer. Her major work is a brand named Sensoree, a therapeutic biomedia. It is not certain when Kristin started her creations, but the things for sale on Sensoree are all patented in 2016. This is a emotive technology with auditory, visual, and tactile displays to promote extimacy, showing people how the feel on the inside to the outside world. The founder Kristin Neidinger is a future concepts designer who endeavors to craft phenomenal technology to enhance and expand physical embodiment. She studied dance, kinetic costumes, and physical therapy. She has presented works at technology and healthcare conferences, in fashion shows, museums, and future visionary platforms. She now works at SENSOREE to further develop her idea on how to make wearable computers therapeutic, emotive, and enhance sensory awareness.
I picked her work because I browsed through some of the works she has on her website. Her clothes changes colors when the emotion sensor senses different feelings of the person wearing them. I thought this to be cool and that it might change the world if people’s clothing reflects their actual feelings inside. I have included some photos of a mood sweater that changes color according to changes in mood. 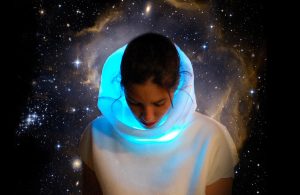 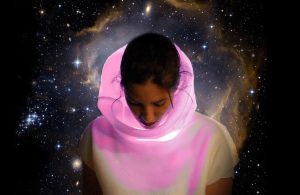 I’m going to talk more about a process employed by Ms. Sophie Kahn rather than a specific project.
Sophie Kahn is a new media artist who grew up in Melbourne, Australia, and attended Goldsmith’s College in London for Fine Arts and Art History; she graduated in 2001.

Sophie has a history in photography, actually- which she finds useful in her pursuit of new media practices. Her sculptures combine Victorian era portraits/busts with 3D glitch art. With the use of the hyper-sensitive 3D laser scanner, she receives information about her subject’s face or body but with an aesthetically fascinating flaw. Due to the sensitivity of the 3D scanner, any movement is detected and registered. Therefore, the rendered subject is recorded with the movements of simple muscle twitches and even breaths that cause some sort of offset.

The results are these fascinating, almost historical sculptures that are either casted or 3D printed entirely.

Kahn does a spectacular job of embodying the allure and mystery of new media techniques in a classical manner which reminds viewers of ancient, excavated artworks from past eras. As someone in the School of Art here at CMU, I often find it very difficult to bridge that polarity but Sophie Kahn manages to accomplish it in an intriguing and sophisticated manner.