I really liked the idea of Patatap by Jono Brandel. Therefore, I have decided to work on an artistic keyboard instrument. I want to make typing a more interesting task by creating this project. So when the user types letters and numbers on the keyboard, they will see their printed letters appear on the screen with unexpected visual and sound effects. So that typing is more of an artistic experience for the user. I haven’t decided what theme of sound I want to use yet but the sounds will all fall into the same mood so the typing experience stays consistent. It was a bit hard to draw the different visual effects but this picture I found online will be similar to the visuals in my project. 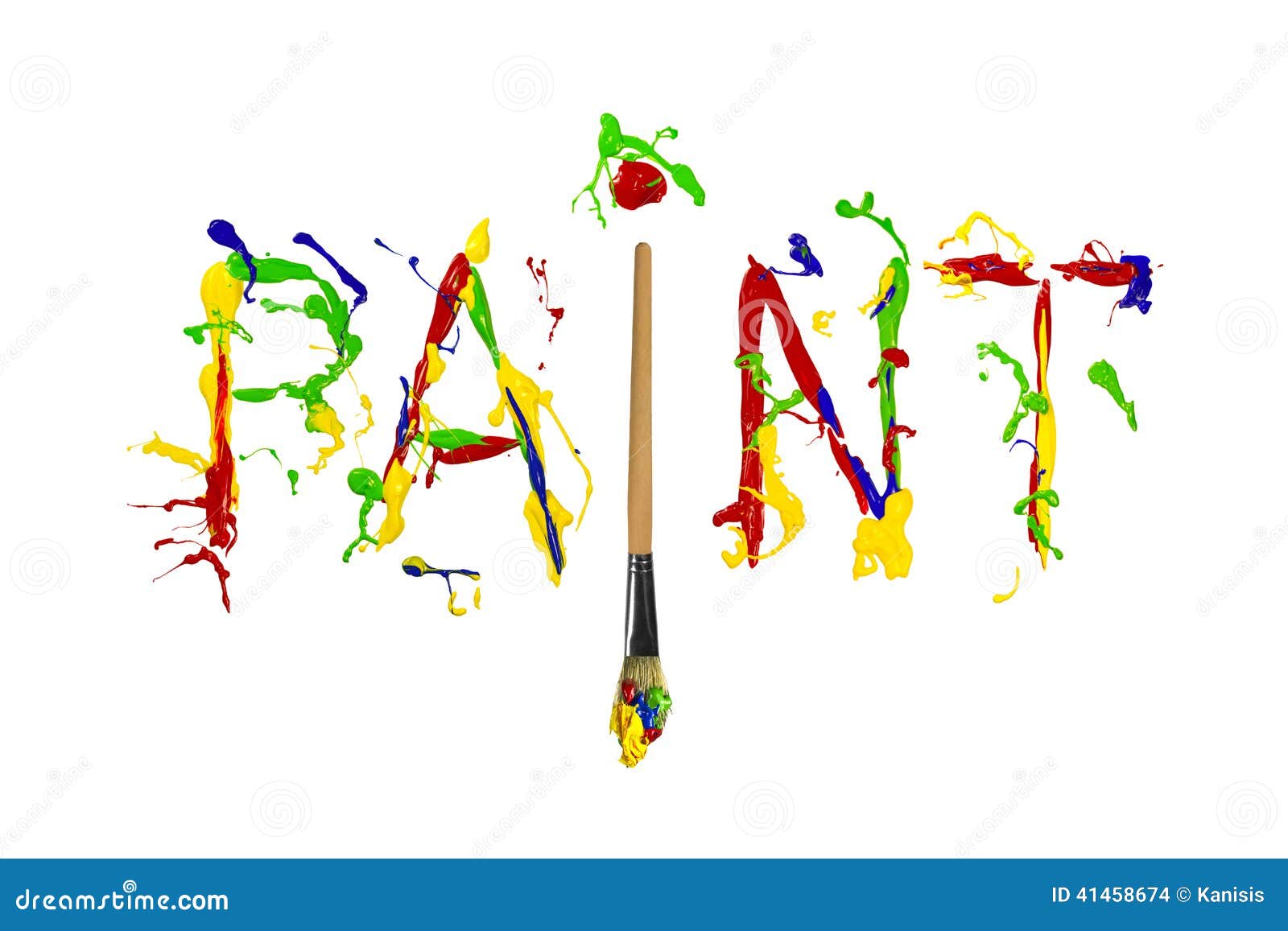 I grew up near a beach, and I really enjoy the ocean and the peacefulness of the waves, but I’m also really interested by the things under the water.  For this final project,  I want to create a looping coral reef that shows the different colors and delight of a underwater land that we are not exposed to.

I was to create a delightful moving animation with the use of simple shapes and forms.  I also want to limit myself to a few colors to avoid getting too complicated. 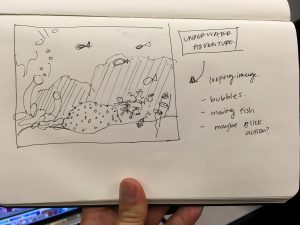 For my final project, I’m thinking about creating an interactive game similar to the mechanism of the doodle jump based on the animation and objects that we learned this semester.

With the background and platforms being generated with some randomness, all platforms are falling off the screen. Players get to control the main character (currently drawn as a scale figure in the sketch) to jump up to the surrounding platforms to keep the character alive. By pressing left or right key, the user can jump on to the adjacent platform. The game will also keep track of the score (height) that the character has jumped up.

There are some features that I’m considering adding: sound effects for jumping, background music, special platforms that will crack once the character stays over a certain amount of time.
The main focus of this project will be the algorithm that generates the platforms that space out reasonably, providing both challenges and fun at the same time. 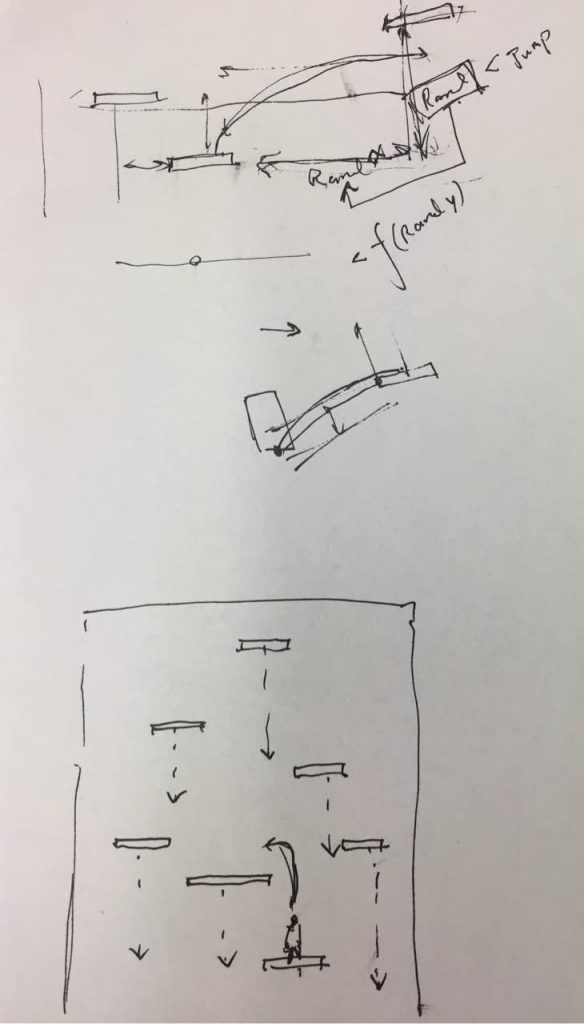 For my final project, I want to do some sort of simple platformer game, similar to one like the original Mario. While I’m not 100% set on the details re:how things will look (like the player character/setting/etc) I know it will be 8-bit style. You can’t go back to anything once it’s left the screen (i.e you can move forward right past the screen and it’ll move, but not back left past the edge of the screen) both to emulate Mario and to avoid everything being very slow because it has to load too much.
It will probably be a typical fantasy setting, and the player character will be a girl. And it will definitely involve rescuing a princess, because lesbian princesses. 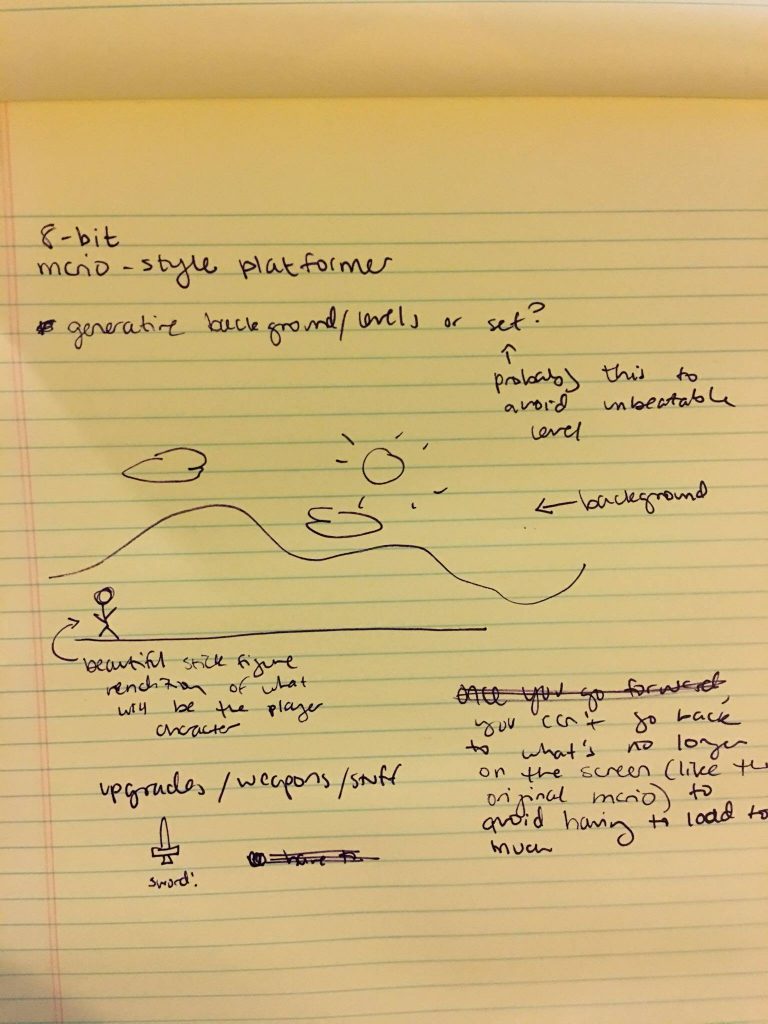 I am thinking of creating different animations with different sounds similar to the keyboard example you gave, but I would like to combine this sound element with hand drawn elements. I think it would be really interesting to juxtapose the hand drawn with the computer generated.

I am also considering making this into some sort of game, but I haven’t really thought much about this yet and would like to just try and get the animations done and working first.

I have already started on a few series of drawings, like the one below:

For my final project, I’d like to propose making an interactive game with the skills we’ve learned this semester. I want to base this game off the game children sometimes play at home, where they pretend the floor is lava and they try to jump on furniture to keep off the floor.

The game would be a side-scroller, where you play as a child jumping through their house and avoiding the lava floor. Furniture will be randomly generated and scroll in from the right (there will be different kinds, like sofas, desks, chairs, cabinets… etc.) The longer you survive, the more points you rack up. Grabbing objects and power-ups will also increase your point total, and power-ups can give you speed or jump boosts.

I think this project is within scope, and encapsulates many of the ideas that we’ve learned this semester. 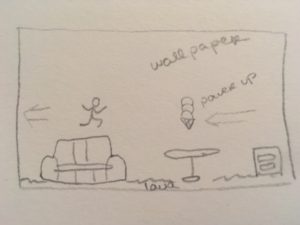 Sketch of what the game’s layout would look like.

What’s in the Shadows?

As you’ve probably guessed, my final project is going to be on shadows! Well, for it to look like shadows, at least. 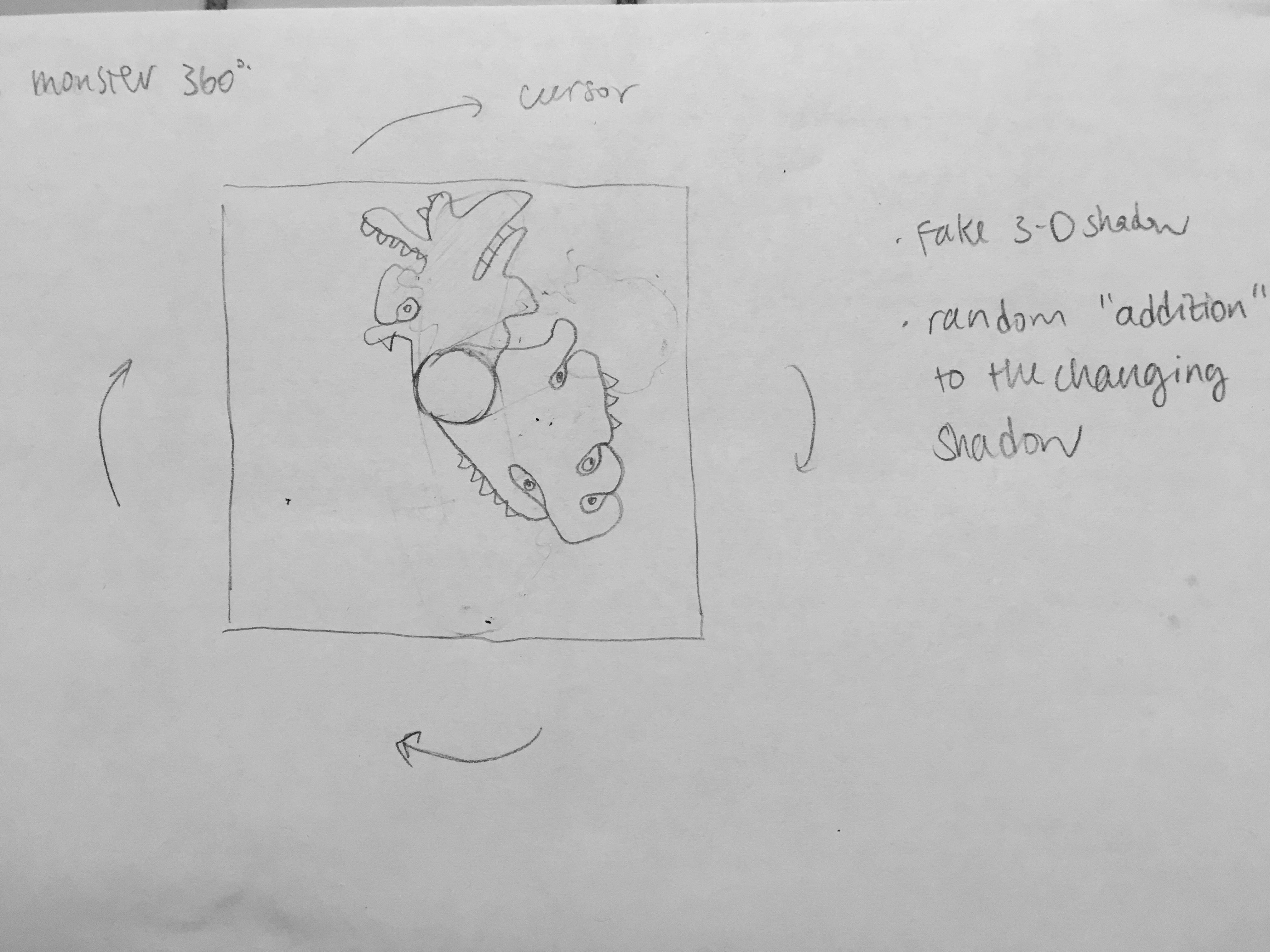 I want to create a changing shadow according to movements of the mouse. As the mouse moves around the “item” places in the middle, a shadow will be generated as if the light was cast on the “item” from where the cursor rests.

The additions to the shadow will be made randomly, but I would like them to follow some basic rules. For example, as indicated in the sketch, a closed space will be interpreted as an eye and a protruding shape will have spikes and/or tentacles generated on it. (I’m not sure if this will be too challenging, since the original work was made by “blob detection.”)

I would also like to add the music element to it. Depending on the progress of major part – monster generation – I would like to add various sound effects as different interpretations are made. But regardless, I will have a background music.

At this point, I haven’t thought through how I am going to achieve the visual effect that I intend to achieve. I would very much like to get some suggestions!

For my project, I want to create an interactive character (that I’ll draw the frames for), and animate him to respond to certain typed commands (the goal here being at least 3).

I don’t have the character drawn yet, but I quickly did a skeleton with the key of commands to the left just to give a general idea. 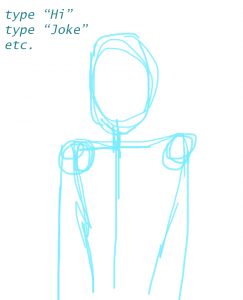 If I typed “Hi” , the character would wave, if I typed “Joke” the character would laugh etc. How I plan to do this is by using conditionals that will load and display certain images based on the typed command (or keys pressed). Think of the walking animation assignment, except instead of walking for the animation and mouse clicks for the interaction, it’d be three different actions based on what you type.

I would like to create an animation of time tunnel. 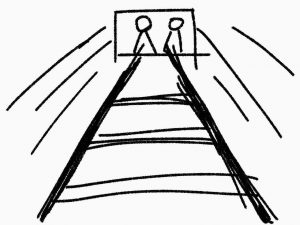 This is to provide users with the feeling of travelling on a train forward. I would love to share my photos taken in my traveling in US. The photo will emerge as we’ve done in customized pixels. And the time each photo takes to emerge will be scaled to how long it has passed since I took the photo. Flashing points can be added to the background to represent passing time. When user click the mouse, the train can take a turn and a new different timeline will be shown.

For my final project, I want to create an interactive game. My concept for the game is to have a koala character that is trying to reach the top of a tree. Along the way, he faces a few difficulties such as other koalas and rocks that the koala has to jump over to dodge. The game will be moving upwards and as the koala progresses the player is rewarded with facts about koalas. I want to be able to use the directional keys on the keyboard for the player to use this game. I also might want to experiment with creating pixel art for the background of the game. I was inspired to create this based off of this video.

Because of this video, I will also be putting koala sounds into the game. Here is a quick sketch of general setup of game. The tree would be vertical in the actual game. 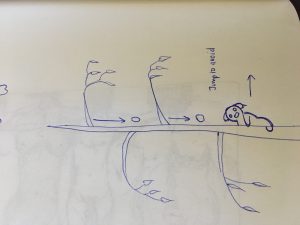