The algorithms these programs use to create compositions follows an evolutionary process: a fragment of music is randomly generated, and then built upon following certain rules relating to music theory and structure.

Iasmus and Melomics are the projects of Francisco Vico, a computer scientist at the University of Malaga in Spain. They clearly reflect his interest in machine learning and neural systems: the way Iasmus composes music is modeled on the human creative process and the way new ideas are learned and built upon.

I really like the idea that if you were presented with something Iasmus or Melomics wrote, you couldn’t tell that it was written by a computer. I also think that the applications a music making program could have for the art form as a whole are pretty broad.

The project page for Melomics can be found here. 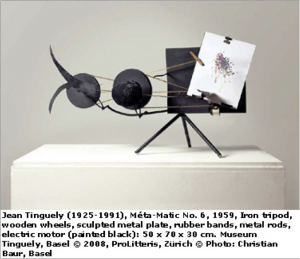 Jean Tinguely was an artist working in the 50s and 60s who became famous for his playful kinetic sculptures.  Some of his more interesting works were actually drawing machines witch produced semi random images that were drawn from machines and not people. These drawings were of course abstract and somewhat crude but had a certain rhythm to them because of the machines limited movement ability. When viewing his work people often comment on the juxtaposition of using a machine (witch is often associated with precision) to create these un-precise images.

This week for my Looking Outwards, I looked at Gerhard Richter’s 4900 Colours: Version II. It was created in 2007 and is composed of 196 panels, and each of these panels have 25 squares. Two things stood out to me about this work. First, even though it is comprised of many parts, you tend not to see these different parts because you only the larger picture. Also, even though it was randomly generated, the colors and patterns they seem to create seem less than random.

This work was inspired by past work (grid paintings) that the artist had done, and the work was created through a “specially developed computer programme,” but I could not find other information specific to the process of creating this work.

While searching through different forms of random art, I happened to stumble upon one that peaked my interest. I always believed that random art could mean something to someone and mean something different to a different person. So when I was browsing through all the neat and wonderful art that was generated through the theme of randomness, I was impressed to say the least. The one that I found and was really interested by is called Tsunami by Hailei Wang. She talks about how she uses python to create her artwork and just looking through her different pieces of art makes me want to be more expressive and more random and less “planned out” in certain circumstances.

Are internet memes art? Well, according to Oxford Dictionary, which defines art as “the expression or application of human creative skill and imagination” – yes, they are. While it seems silly to classify them as such, comedy in and of itself is an art form, and internet memes are used almost solely for comedic purposes.
The tumblr blog “memelovingbot” was created by Nora Reed, a generative artist in New Mexico. She’s created multiple bots on tumblr as well as over 60 on twitter. While she does sometimes change the frequency of the bot’s posting and updates the bot when new memes get popular, the rest is completely up to the bot. It can’t do things like answer asks or respond to messages sent by other tumblr users, and it doesn’t have the ability to learn, but even with its rather simple format it still generates some pretty hilarious meme combinations.

The creator also open sourced the code, and it was made using Cheap Bots Done Quick which uses Tracery. All of this information (and more) can be found on the tumblr bot’s FAQ page. While you do have to be rather familiar with these memes to find this kind of meme-distortion funny, the blog is still worth a look regardless.

This is a very small example that very few people have commented on, but small details like this are what immerse me into games. In the Devil May Cry series, the game encourages the player to fight expressively and stylishly by grading their performance at the end of every mission. 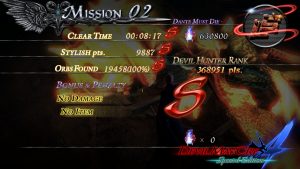 An example of this can be seen here, in which the player receives an “S” rank and the screen is sliced many, many times and eventually breaks at the seams.

I believe that the cutting angles are all predetermined, and that the game picks a fairly consistent amount to display depending on the rank, but randomizes the order in which each cut is executed. Additionally, when the screen breaks apart like glass, randomness seems to be utilized to a greater extent as the shards drop. Particularly, applying the physics engine to each shard and treating it as an object in free-fall. This is all speculation though, seeing as how neither player nor developer has really elaborated on such a minor feature.

What this produces is a nice visual that reflects the free-flowing rather than choreographed nature of the combat and feels empowering to players that take the time to refine their skill.

Mike Love is a musician based in Oahu, Hawaii who uses randomness in his music. Over 12 loops he builds a song through sporadic syllables that culminate into full lyrics. I admire the amount of precision it requires for Love to be able to succeed in communicating his lyrics over the numerous loops he creates. I also admire his unique approach to making music, and how it requires a process. Love randomly chooses the syllables he wants to say over a single loop and by the end of 12 loops he has created full lyrics. Love believes that the process and message is most important in his work, focusing on messages that affect change when it is necessary, specifically focusing on being accountable for your actions. 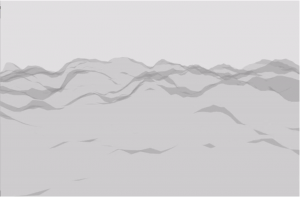 While researching computational art that uses randomness I stumbled upon the blog of Fletcher Bach. I was immediately mesmerized by his generative terrain pieces (screenshot above). He has created this interesting pieces with Processing and random lines that get added in the background. What I admire most about this piece is that the gray scale and rather simple composition allow the randomness to speak for itself. While simple in form (its lines and color), it is complex and dimensional in scope. The randomness makes this piece dynamic and visually appealing. To see his pieces check out his blog. http://fletcherbach.com/filter/processing/COMPUTATIONAL-ART

VILLA from Malevo on Vimeo.

This project called VILLA means error in Icelandic. It is a visual identity video for the REYKJAVIK VISUAL MUSIC PUNTOY
RAYA FESTIVAL. The video is fundamentally based on idea of creating error over black and white clean dot and line motion graphics work. The distortion is made by series of digital glitches through the image and only uses pure dots, lines, colors, motion and sound, and gradually they lose their original quality. However, through the distortion, the image gains new texture and beauty. In this way, the computational art using randomness visually explained the power of expressionism and the way it transform.

A Text of Random Meaning is an art piece by Rami Hammour that is a mapping of a random number generator. I think it’s really interesting because it looks like lines of text, and calls to mind text art to the viewer, who is then intrigued and will want to look deeper – but it is really just randomly generated. But because the viewer thinks it is text, and will likely continue believing it is if they are kept at a far enough distance, the work is given meaning. Because it “is text” the “words” contained therein must have some sort of meaning and make a statement. But because it is just random, there is no meaning or statement – which just points out the natural human reaction to words and to text art. I think that’s really admirable and interesting, because it forces us to introspect about our expectations of art and of text.