My interpretation of the blob family prompt manifested itself into an exploration of the differential growth algorithm. After dong some research on the algorithm itself and code tracing a few different implementations, I landed on Alberto Giachino’s Differential line growth with Processing. I have mostly been working in processing, and it didn’t require any outside dependencies, so it made the most sense to use this one as the base. Jason Webb’s 2D differential growth experiments also really helped in understanding how the algorithm works and how it can be modified. After playing around with the algorithm in the hatching exercise from last week, I wanted to see how I could constrain the growth to one specific shape, more specifically, in a blob-like shape. Golan had showed me how to use an off-screen graphics buffer, so I thought it might work if I tried to use that as a layer mask of sorts. The off-screen graphics buffer would contain white filled blobs (made by modifying the radius of a circle with perlin noise) against a black background. Therefore, whenever a node was at the location of a white fill, the differential growth cohesion and separation forces would act. When a node on the circle was at location of a black fill, there were no forces acting on it to make it grow. The nodes that were growing then formed into the shape of the blobs, and to my surprise, sort of collapsed in on each other where the edges were. It made what looked like the outline of the blob. The two pictures below are the blobs rendered digitally.

I had a lot of fun with this one! I love texture and I love organic/bodily looking things.

Here is the code:

END_OF_DOCUMENT_TOKEN_TO_BE_REPLACED

Each smiley is made up of four chains of springs and a bunch of repelling points: the spring chains make up the outline, two eyes, and a smile, and the whole face is filled with repelling points to give it some volume. Two of the points are selected to be the left and right pupils, respectively. The whole face is sucked into the tube with a force field that is applied to every point. There are also collisions with the tube walls.

Each of six faces is on its own 24 frame loop, and the loops are offset from each other by 4 frames. In order to exaggerate the acceleration of the faces as they are sucked into the tube, there are actually more sub-frame simulation steps towards the end of each individual 24 frame loop than in the beginning. It starts out with just a couple simulation steps on the first frame, and ends with several hundred on the last frame. The faces are also filled with a simple parallel-line hashing with three distinct colors.

Originally I planned the walls of the straw to be a thick outline, the outlines of the smileys to be thin pens, and the fill color to be cheap color markers. This all worked out except for the thin pens, which didn’t like to draw on the plastic-y surface of the flipbookit cards, so I ended up doing thick marker lines for all the lines. I suspect that this was actually a good thing, and helped by increasing readability of the animation, and by fudging some alignment errors both between the lines/colors within a frame as well as alignment between frames.

“A blob is an illusion of controlled chaos” (Entering the Blobosphere, Laura Hyunjhee Kim). Is the illusion the control or the chaos? I imagine you could get different blobs by approaching it in both ways.

Ever thought of making comics with code? I sure did! Hence why I decided to make this my blob assignment 😀

END_OF_DOCUMENT_TOKEN_TO_BE_REPLACED

For mine I wanted to make hairy blobs. 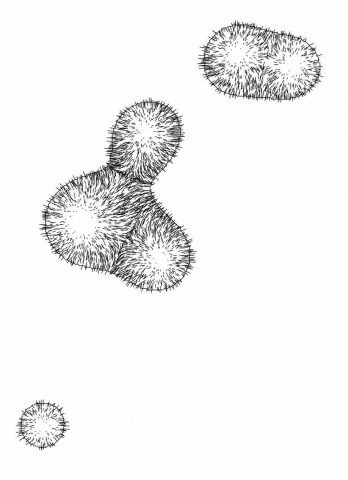 Continuing my practice of trying new tools for this course, I decided to try out the thing umbrella for this project. The umbrella is a project by Karsten Schmidt in which he creates a giant package ecosystem full of every algorithm one could ever want. Thi.ng was originally written in Clojure, and the transform definitely feels like Clojure. For instance, I spent a long time fighting with the system until I realized certain functions fail unless passed empty lists as a final parameter. That being said, the library is wildly powerful! I was able to achieve amazing results with very little code. I would totally use the thingiverse again, though maybe when under a much longer deadline. I found myself thinking of Good Shape while I worked—how it’s particularly difficult to describe what makes a shape “better.”

I have a somewhat meager offering for this week. I came up with another algorithm that combined circles with circular arcs by matching the slopes of the tangents, but I had difficulty implementing it. I was trying to mimic the forms of water bubbles, and it was going to look something like this: 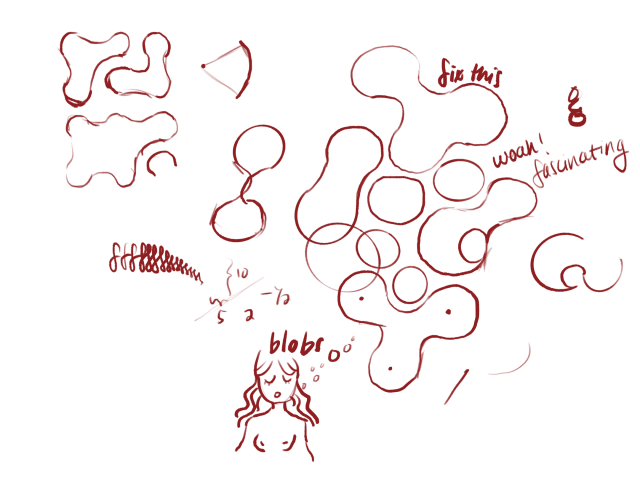 I ended up pivoting to something simpler, an implementation of the algorithm that Golan mentioned in class, which mapped 2-d space Perlin noise to radial alteration of circles. I played a little bit with using the blobs to fill a space at different densities. Some of the different iterations looked like this: 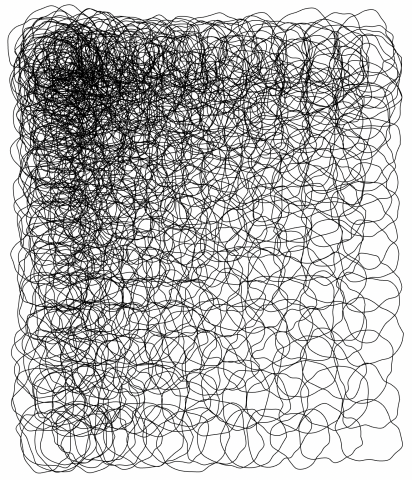 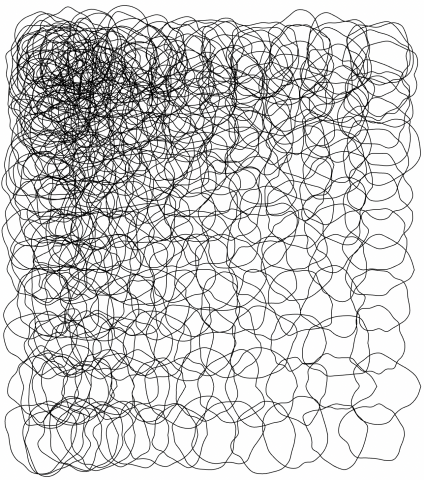 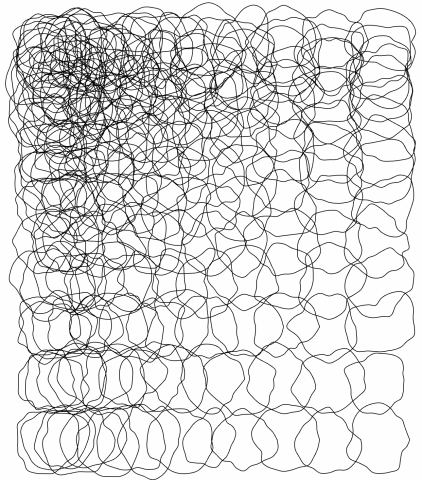 I liked the poetry with which Laura Kim spoke about blobs, and how they saw blob-making as a form of alternative communication, a strange and novel language. 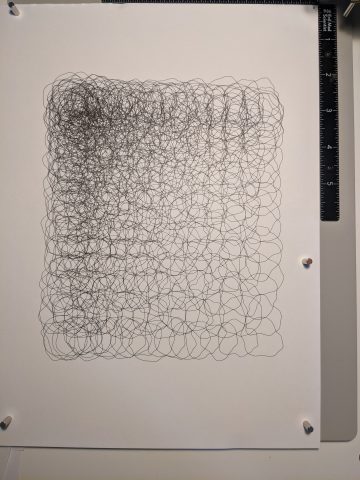 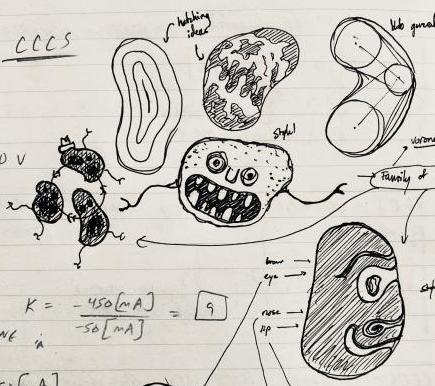 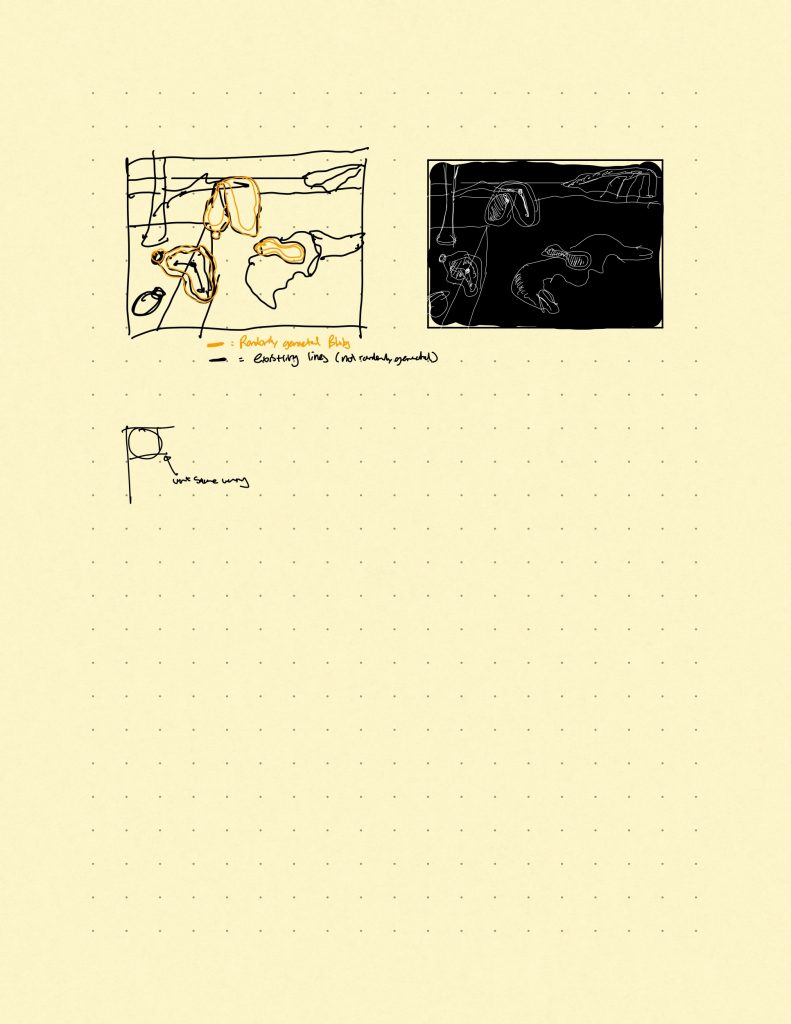 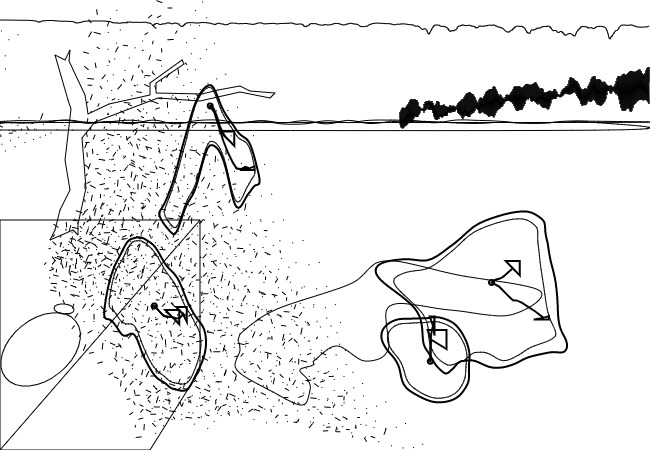 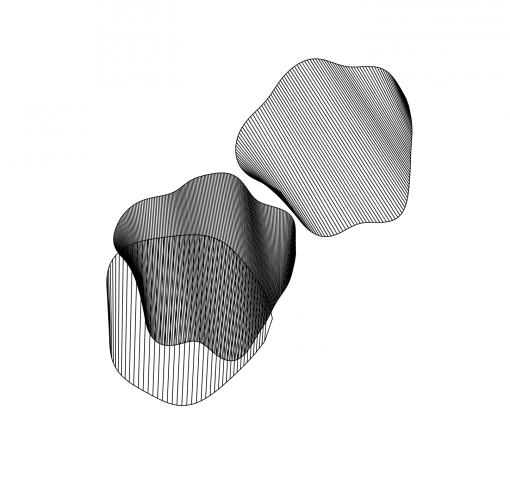 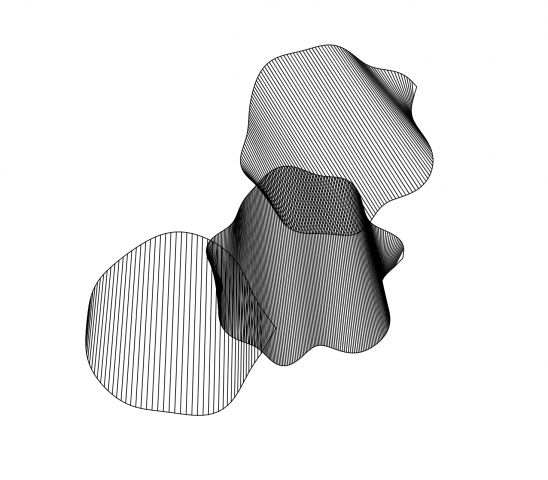 Here is the SVG of my final blob family:

Here is the final plot: 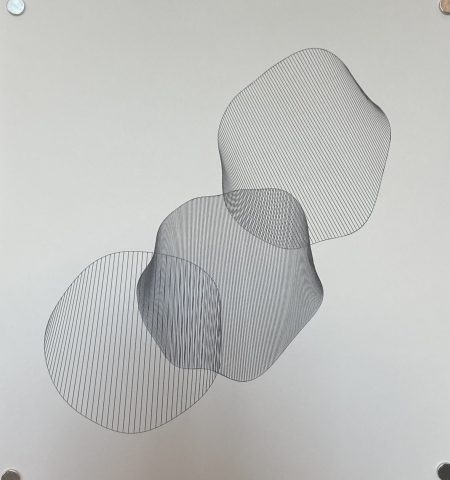