Dr. Woohoo is a generative artist who combines color palettes, patterns and designs with computer algorithms to create unique artwork. In this particular artwork, Woohoo takes color palettes and creates patterns with those colors through computer algorithms and translates them to knit design. In this particular case, he puts them into shoes. This allows people to have their own unique, custom designed shoes through computer generation.

I chose this particular artwork because I found it interesting how art and computation can be combined to create something as antique and old like knitting. Knitting is usually associated with more older types of fabric art, something that is hand made. But by combining it with computer algorithms, it is made into a novel type of fashion design, creating a unique experience.

Matthieu Regout is a designer who proposed an identity redesign for the city of Brussels. He wrote generative code to create a blue polygon and a red polygon, overlapped as a series of forms to show the hybrid nature of the city.

The algorithm that generated the work was built on a series of rotated views of a perspective pyramid. Regout took two perspectives of the generated forms from complimentary angles, and used opposing colors to show the duality. The final product created a clean and simple series of designs, which is appropriate for the branding system the image exists in. The series of two forms coming together to create a single image served to emphasize the hybrid nature of which Regout meant to bring out. The simplicity of the forms acted together to form a system of the printed posters and booklets for the city’s visual identity. 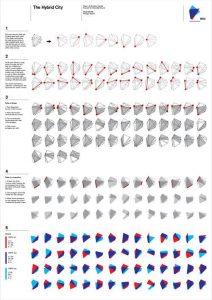 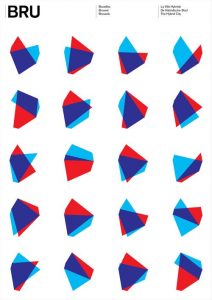 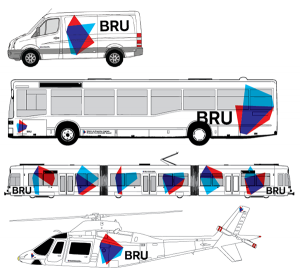 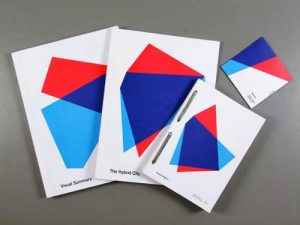 Matthieu posted his project, “Brussels – The Hybrid City” on Behance in December, 2013. 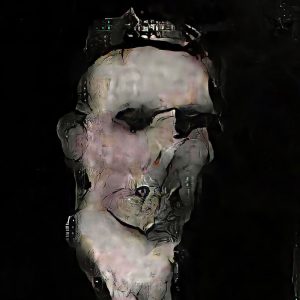 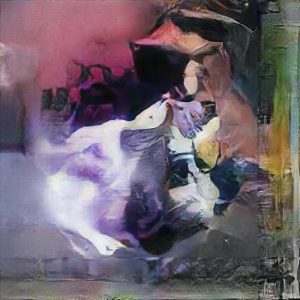 Klingemann uses machines to generate art, he does this by feeding visual information into the code of generative adversarial networks, which can teach themselves how to create digital images that look like ones a human would create. What immediately struck me were the the pieces created by the machine. The embedded video struck me as particularly haunting (the program generated the music as well). Also the quality exceeded my expectations of computer generated content, before seeing this work I imagined pieces of this nature to follow grid structures/patterns.The algorithm mimics a neural network which responds to images by learning and creating. All of the works displayed follow a surrealist style with darker undertones. Since Klingemann did some of his work in continued collaboration with Google I am excited to see what the future holds for his work with the resources made available by Google.

Computer-generated interlocking 3D joinery, inspired by Japanese joinery by a researcher at University of Applied Arts in Vienna, Aryan Shahabian.

Japanese wood joinery is widely known for its complexity and delicacy. Japanese carpenters have been making this beautiful wood joinery, known as Daiku, from generation to generation. Their exceptionally advanced joinery skill makes not only a wonderful decorative feature, but also a functional piece of design.

Even though this Japanese joinery has long been admired by people, it was almost impossible for normal people to make their own joinery design since it requires a impressive artistic craft. However, the algorithm that Aryan Shahabian created made possible for people without those skills to design their own Daiku. The algorithm handles complex geometry of joinery and organic form of the final object through software.

Furthermore, it might be more interesting if the algorithm could generate curvilinear shape instead of rectangular joinery. It might require additional geometrical solution.

Tentasho, created by Austrian artist Lia, is an installation that can be interactive using a touch screen. However, it can also be autonomous by exploring its’ parameter space.What I also find clever is how the installation will move on its own if there is no one interacting with it, most likely peaking the interest of those who might walk by it, and hopefully welcoming people to interact with it.

What I admire about this project and the work it produces is how every piece that comes out is incredibly unique and beautiful—invoking different visual feelings from the viewers. Some come out looking delicate, almost floral, whereas some come out looking dark and menacing.

While the installation does achieve the minimalistic approach it strives for, I personally would like to have seen what the outcomes would look like if the program integrated brighter colors into it. However, it does inspire me to look into unique programs and algorithms that would draw in an audience with both an interactive aspect and a unique output. 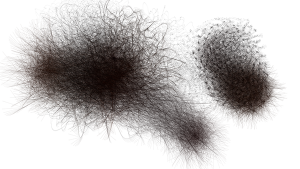 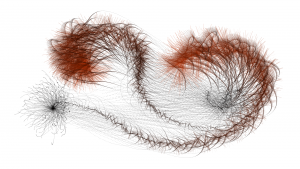 The algorithm used to generate this installation was made with a minimalistic approach—using only a single algorithm.

I looked at the generative artwork of Tina Frank, specifically a performance she did live in Basel, on September 12, 2015. The performance consisted of a constantly changing background accompanying rather abstract, synth-electronic-like music. According to Frank’s website, all the images were created live by using audio frequencies played through a synchronator. The music she was creating was fed into a computer, which then made visuals in the form of a digital video, which was projected.
I think the beauty of this project is that it creates many works of ephemeral art, and that it uses technology so creatively. Looking at the wildly contrasting pictures of the projected video makes me reflect on how each moment a person experiences this performance is so unique and isn’t repeated again. The fluctuations of the sounds and sights mix to make a constantly changing piece of art. I think it’s impressive and an interesting contrast to typical, “classic” art, such as paintings or drama plays.

(I tried to embed the video, but they have restricting permissions, so I was unable to do so.)
http://www.tinafrank.net/audiovisual-art/av-performance-coh-frank/

As use of algorithm and integration of parametric design are deeply rooted into the design process in architecture, Aryan Shahabian, a researcher at the University of Applied Arts in Vienna, developed an algorithm that can create over a billion distinct combinations of interlocking 3D objects inspired by Japanese joineries. Japanese architecture and contrstruction, from its past, has been known for its complex wood joineries that interlock and form bonds without the use of nails, screws or adhesives. This development of the new algorithm open up opportunities to allow artists to create free from structure with no reliance of use of nails and generate art through mastering complex wood joineries. This program would also naturally lead to easier fabrication when combined with machines such as laser cutters, CNC machines, and 3D printing. As an architecture student who have experienced several projects dealing with joinery system, this program would definitely help young architects like our selves to understand these complex joineries better as well as integrate it into the design process to allow flow of variety of different, unique forms.

This is an architectural project that aims to get the public to have an experiential feel while they are in this space using all of their senses. It is known as Phenomena and was made by Benjamin Dillenburger and Demetris Shammas. It is a piece of architecture that reacts differently with its surroundings depending on the time of day: reflects light and casts shadow during the day and transforms into an “oversized 3D display for video projection” at night.

In my architectural modern history class we are learning about more modern architecture and how the idea of architecture is no longer only about buildings, which is exactly what this project incorporates. Phenomena is considered architecture because of its experience and not because it is a building, which I find amazing because I used to think that architecture was only associated with buildings.

Based on the complexity of the shape of Phenomena it is obvious that the creators had to use a computer program to create this project and based on several algorithms that they had to create, such as the different types of materials and how each material reacts to different factors, including light. Another algorithm could have been how different forms could come together to create a certain feeling. 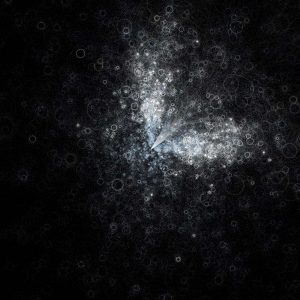 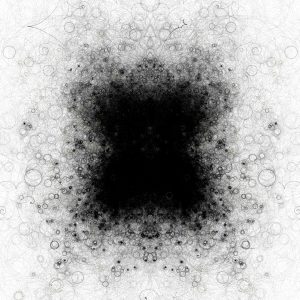 Bubble Chamber (2003) is a generative painting system created by Jared Tarbell for an exhibition in the Processing gallery. The system’s imaginary particles are created by collisions that contain 216 random calculations and over 1 billion pixels of information that are unique to each one. Just as impressive as the broad range of possible outcomes are the visual elements of the final products. The randomness of the scattered patterns create fascinating visuals that are simply absorbing. The limited usage of colors contrasts with the detailed patterns, creating an excellent balance. Even with only four possible types of particles, the overlapping designs are almost stomach-turning. However, I would love to see more variations, as some final products in the series resemble one another. 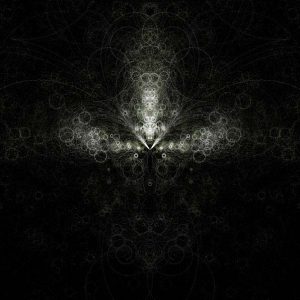 The project that I decided to tackle is Weird Faces by Moka(or Matthias Dorfelt), from 2012-2013. 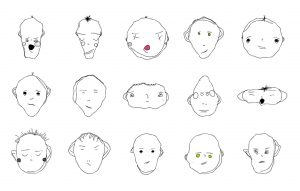 It is a project that is aimed towards creating a program/algorithm that generates various and unique faces. What I admire about this project is the ability that is make it so natural. I always expected a computer generated face to be very structured, exact, and calculated, kinda mechanic. However the creator was able to create an method to create very random and organic drawings. If I were simply shown the images, and not know it was a computer program, I would have thought an actual artist drew it.

The creator did not disclose what algorithm was used, but it was most likely a improved randomizer for the face shape, eyes, cheeks, mouth, nose and colors.

The creator’s artistic style seems to be quick similar. It usually uses very simple designs and looks quite abstract. It looks simply and random, however the general structure and object that the creator is still trying to describe is still evident and clear.