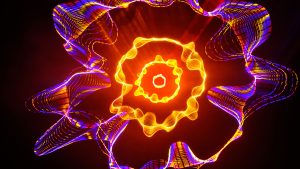 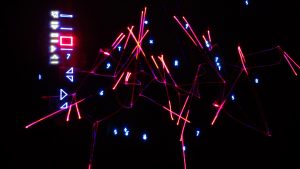 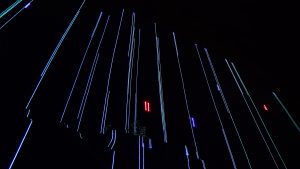 This is Lumière III by Robert Henke. It is a audiovisual laser performance, in which an algorithm generates laser curves to bounce off the pre-designed spaces in the auditorium to create series of visual effect, including geometries, curves, lights, colors, etc. Sound also generated from the lasers. A dedicated sound synthesis engine was built for this particular project. Therefore, the artist built a custom algorithm for generating sound.

I appreciate that the algorithm generates both visual and sonic effect. Therefore, changing the laser would make change to both of them. From the geometries and colors, the observer can guess what the sound would be, because certain shapes and colors probably represent certain aspects of music. (eg. red represent dramatic emotion, etc). I thought the randomness of the lasers, and the random yet inter-connected visual and sonic effect generated by it is very interesting.

You can read more here

As I was reading the prompt and scanning Youtube and Vimeo for Sound Art projects that interested me, I came upon this one, titled Beat Slicer by Amanda Ghassaei. I chose this one because it was simple and minimal, on a level where I would understand and not be too overwhelmed with a lot going on.

The Beat Slicer is an arduino-powered music controller. Each button manipulates the playback of the song programmed. And although, in the controller is a lot of physical computing aspects I am yet to understand, I can imagine that each button is programmed in its own way to produce its own unique manipulation of the song.

Amanda Ghassaei uses the same controller for other projects, and has published an instruction guide here: http://www.instructables.com/id/Sugarcube-MIDI-Controller/

My Looking Outward for this week is Guitar Sound by Ronald Jenkees.

Ronald Jenkees is an electronic music composer who has been making music since 2007. He has 5 albums; this song is from the second one (from 2009). Ronald Jenkees uses a combination of his own playing on synthesizers with generated tracks to create a characteristic personal sound. Although his method is not deeply algorithmic, the combination of conventional playing and electronic methods creates an effect different from both conventional songs and typical electronic music.

Earlier this year, Yuri Suzuki collaborated with QOSMO — one of the worlds leading AI experts — to create a “Sonic Pendulum”. This installation generates a calming soundscape that is continuously generated by the AI system in response to its surroundings.

The actual installation itself is comprised of three swing-set-like rigs, with a series of speakers hanging as pendulums. These pendulums swing back in forth in different, organic patterns that are regulated by the central algorithm. In this way, not only is the installation aural, but visual. Viewers experience the sound as an observable motion in space, and furthermore, as a physical feeling in their bodies. The swinging motion generates a doppler effect, changing the pitch of the perceived sound, and thus oscillating the resonation in the viewers body.

The central algorithm controls all the aspects of this system, creating a unique interaction, a conversation, with the viewers. A number of cameras and microphones are set up to register the sound level and population of the viewers. The central algorithm takes in this input and adjusts the oscillation pattern of the pendulums as well as the music being generated to match and respond to the environment.

I admire this projects interdisciplinary and inter-sensory nature. Yuri Suzuki seamlessly bridges music composition, design, and AI computer science in a way so that each informs the other. As a result the viewer can receive a much fuller experience… a much more impactful one, too. Suzuki intended this project to calm and relax its viewers, and he could not have achieved that goal to the same degree without the implementation of visual with audio, and the audio with physical sensation, all of which are conducted by the AI.

One last note about this project. I really admire Suzuki’s intent for the Sonic Pendulums to create a mindful space. I would like to see more and more of this kind of art in the future, using human advancements to further mental health.

For more information, and a cool demonstration of the project, here’s a link. 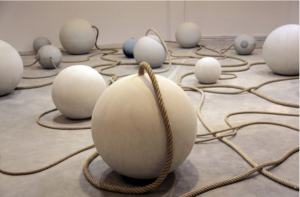 For this particular Looking-Outwards post, I looked at an artistic piece of Otobong Nkanga named Wetin You Go Do?. In this particular artistic piece, a distinctive sound can be heard from three of the balls. The sound is very carefully edited and layered in a specific way. The sound is edited to portray a part narrative and part song, with shifts between stream of consciousness and profound statements in English, French and Nigerian Pidgin, an English-based Creole language widely spoken across Nigeria.

Symbolism plays a part where each sphere represents a different imaginary character. The ropes connecting the spheres suggest networks within society.

I admire the simplicity yet the strong importance of symbolism behind this artistic piece. Additionally, the sound editing plays an essential role in conveying this symbolic message. The algorithms behind the sound editing is a bit hard for me to guess but I assume that there is definitely a distinct pattern between the usage of different languages and sounds.

The artist’s artistic sensibility especially shines in the simple way he successfully conveys a very distinct, clear, and “loud” message. The message can be loud without having to be physically loud by sound.

I appreciate this project because of it’s use of natural aspects in a computer aided art installation. This project uses light sensors to influence the ambient noise played through the speakers. Depending on the light levels collected from the sensors it creates a complex soundscape. This is something that is inspiring to me because it is an example of using contextual elements to influence the environment people experience. I could see this becoming something more interactive using other sensors that are based on the people and the noises already within the room. I could see this becoming a very uncomfortable room that changes as people move through it.

Ryoji Ikeda is a famous japanese sound and media artist. He crosses the boundary between visual media and audio media and creates mesmerizing performances.  He focuses on very detailed sound like super sound and frequency using high digital technology. Developing his unique way, he gained world wide fame. In his work, sound, time and space are composed by mathematical way so that physical features of sound could reach to audience’s perception and feeling. Many of his work are consist of variable materials such as visual media, sound, installation object and new fabrications which lead his work to new area of art. I admire his work as he create new dimension to audience with very detailed sound and installation art. I always have interested in different perception to the world, his work gave me a glimpse of new world!

The visualization of sound inspired me because I used to do artworks about visualization, for example, the visualization of math. Thus, I zoomed into the relationship between sound (amplitude and frequency) and visual patterns to see if one relates to the other. Through my exploration, I found Simon Russell’s work to be a really interesting example to me. He is an animation director based in London. This project is about sound visualization and it is called “Audio Geometry Exploration- Sonification in Houdini”. This is a project using Houdini experiments where geometry is used to visualize sound and creates patterns. Simon discovered that Houdini is really flexible with audio and allow the audio to create f-curves from geometry. So he can manipulate in myriad ways. To be more specific, Simon used 3d geometry to connect collisions of lines in the visualized part with an audio pulse based on the shape’s height. The basic strategy is to export from Houdini into Cinema 4D and see cloners and splines to create additional geometry. Last but not least, he used After Effects and Audition to composite and mix. Overall, I really admire the coherence between the visual part and the sound. It is really pleasant to watch the whole video when two of our sensory parts are combined well.

Camille Norment is an Oslo-based multimedia artist who works with sound, installation, sculpture, drawing, performance and video. For her piece, “Rapture”, she utilizes 12 voice chorus, glass armonica tones, and audio devices. According to the artist, ‘Rapture’ is a three-part project consisting of 1) a solo exhibition in the Nordic Pavilion, 2) a series of sonic performances unfolding from physical and referential elements within the installation, and 3), a three-part publication that explores the greater context of the investigation through a variety of essays relating sound to the body and society. Mainly, the artist explores the tension of constantly changing time and uncertainty of times. ‘Rapture’ uses vibrations (sound waves) for a phenomenological and socio-political reflection upon the body and mind’s relationship to trauma, ecstasy and the state of becoming. The body of the pavilion itself is subject to this experience, allowing visitors to witness, and enter within a body suspended in a state of excitation. Through this piece, visitors walk into a space of contrasting values: body of art in order and in chaos; art in harmony and in dissonance. 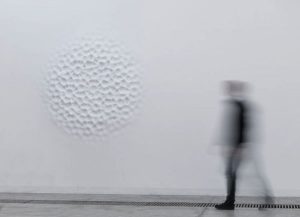 Italian artist Loris Cecchini uses sound waves hitting water and creating ripples as the inspiration for his sculptural work – he focuses on creating something invisible, naked and visible in its true for to an unassuming viewer. 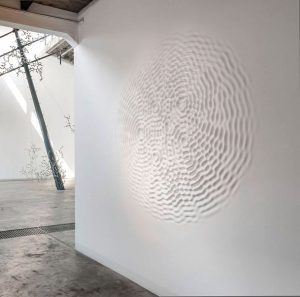 Each of Cecchini’s installation pieces freeze momentary natural forms on the wall, encased in polyester resin and white paint. The lack of motion and their monochromatic treatment leave each beautiful form open to interpretation and with an invitation to appreciate the patterns of the natural world. 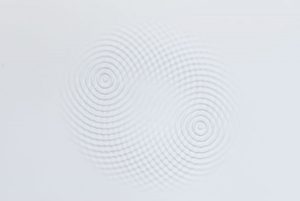 And of course, none of this would have been possible without the correct use of technology, as Cecchini himself says:

“I’m very interested in the utopian dimension which bonds technology and nature. And I try to interpret a cultural landscape made of different “realities “, working on a diffused perception made of virtuality and consistent matter; in this sense I try to bridge. Naturally my work opens that to the wandering thoughts of the spectator.” 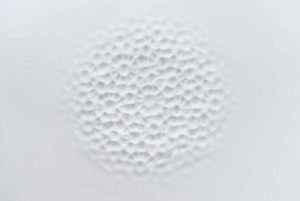