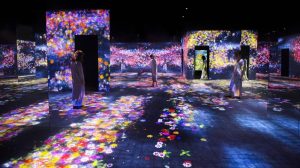 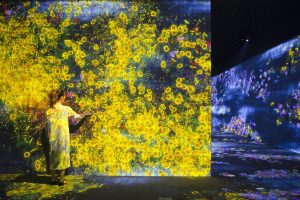 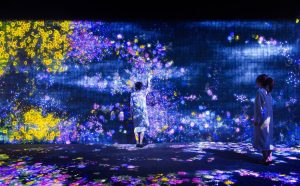 I went to this immersive and interactive art exhibition by TeamLab this summer. The exhibition was installed in eight rooms, each room featuring one theme. The theme that interested the most is the Flower Forest. The exhibition uses digital technology to blur the boundaries between the physical world and the digital world. People can interact with the flowers, grow them, move them around, etc. The flower also “grow” on people’s clothing. I suppose the artists used commercial software because this installation only requires a sensor to detect people’s motion. A custom software wouldn’t be necessary.
I really admire the concept of the exhibition. In comparison with the traditional art exhibition where the audience should stay away from the artwork, the artists intend to have the audience to touch, feel, and even interact with the artwork. The audience can understand the artwork from their own perspective and I think it’s pretty amazing.

You can view more images here

Most of my interest in tech-based art centers around sound art and electro-acoustic performance. I’ve been really interested in the integration of performer movement (dance or instrument-playing, etc.) with the production of sound, and I’ve found “wearable instruments” especially intriguing.

Here is the website for one of the first instruments to catch my attention: a suit with cables, which are amplified through the bridge’s infrastructure to produce sound. 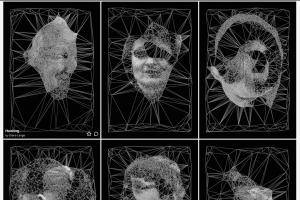 Generative Portrait made with processing by Diana Lange

Diana Lange Generative Portrait works started from taking photos of individual in context, to portrait outline created with small units, then adding on more and more units over and over. The portrait is created with multiple layers. The process reminded me of myself doing observational drawing with pencil. The small units with coding has this organic consistent texture. I am inspired by the generative portrait, having both the 2 dimensional sketching quality and the 3 dimensional depth at the same time. Moreover, they contain both organic and geometric systems.

I saw this video few weeks ago and it was most interesting project I’ve seen recently. It’s simple, but it has technology and design principle that I love ‘Time and space’. This project created movement in space with only water using lights and time.

Sports drink brand Gatorade made a advertisement for G Active promotion using 3D technology and motion capture created by Unit 9. It had a real-size running water athlete, animated it in mid air, and caught it on camera. They used motion caption technology to capture the real person’s movement like running, jumping and kick boxing. And using 3D liquid which has liquid drop into specific small halls and express each frames very precisely, they filmed each frames like stop motion animation. They created physical 3D animation with interaction between lights and time. Since water drops are usually invisible to human eyes, they need to come up with new idea to hold very short time frame. Using flash and strobe light, they had succeed to capture the each moment of frame. The director of this project said during the interview that he got inspired by his formal work experience as a photographer. He used to tell the story out of image using unusual way into photography and this leads him to capture something new.

Here is the website of the production. You can check more detailed description about their project.

Anne Cleary and Denis Connolly are artists that focus on perception and the relationship between the world and its inhabitants. They created the “Meta-Perceptual Helmets,” which allow humans to see the world from the point of view of different animals. 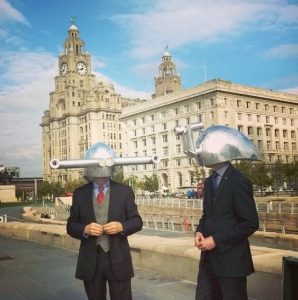 I find this interesting because humans have never truly been able to experience the perspective of another animal. The artists questioned why our eyes are positioned the way they are, and what kind of limitations or advantages we have over other creatures. The project was intended to be an interactive art exhibit, but I think it could be used for science as well. Seeing from the perspective of animals can help us understand more about the creatures themselves and can allow scientists to develop tools that allow us to see differently. 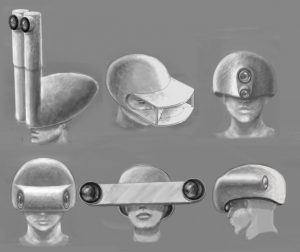 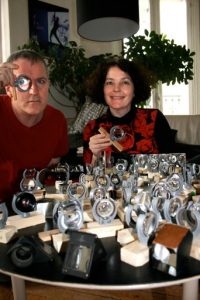 I explored some of the suggested blogs and stumbled upon modern map art that was created by David Hoe (Mini Cloud Studios). What struck me the most about his art was that they were made up of various simple elements such as rectangles and squares. This also reminded me of our first project assignment for 15-104.

Although the small individual elements were rather simple, they made up to produce a very intricate and detailed masterpiece. David Hoe’s modern map art was compared to jigsaw puzzles. The artist himself deconstructed the puzzle to individually color each piece before assembling altogether again with his own custom designed software. The art is made using tools such as Node.js, Google Maps API and node-canvas package.

I had only seen such similar patterns found in modern map art from actual printed maps in my Geology class before. David Hoe’s works made me appreciate maps as a form of art for the first time, since I had only seen it as a tool for navigating purposes before. The additional care to color and shapes in the modern map art compared to regular maps is crucial. However, maybe using a wider variety of patterns could increase the art’s individuality. Overall, I really enjoyed the sense of harmony that the art seems to express.

Taking inspiration from old De Stijl works, Kyuha Shim is able to input images as well as type into code to create “RASTER” (2017). Shim is a computational designer and researcher at CMU and his work “RASTER” has been funded by CMU. By utilizing p5 Shim has been able to create images ranging from literal to more abstract interpretations. I admire this work as Shim is able to combine both an advanced knowledge of De Stijl work both technically but visually. She is able to balance both of their contexts and combine them creating this work that can applied to our world. Other works by Shim also relate to “RASTER” as manipulating images and type through generative code is common through his work. Users who utilize “RASTER” and range in understanding of De Stijil work will be able to understand at a deeper level their proportions as well as aesthetic that is apparent through the amount of work.

I saw a very interesting project a few weeks ago in Jersey City at an exhibition featuring a range of arts, including interactive art, paintings, etc. In this project, there is a camera that picks up people’s faces and recreates them using squiggly, long, noodle-like shapes, and projects them on a wall.

At first, I didn’t know what the piece was doing, but after stepping back a bit I could see that the camera was picking up faces and recreating them in a fun, creative way. I appreciated it because it made people curious and gave them a laugh after looking at their silly, distorted reflections.

I’ve seen interactive art that has similar principles of using camera recognition and distorting or changing the information it picks up. I knew it involved code, and I was in a state of awe, wondering how it did that, how the artist made this happen.

Something that might have been cool would be if the distorted image stayed put together for a bit longer; once the face(s) in front of the camera moved, the squiggly noodle-faces would fall apart almost instantly. That encouraged people to stay still and watch the squiggly portrait appear, however, so I think the fact that the art was so ephemeral was also a point of interest that gathered an audience.

I think the artist’s inspiration probably came from their ability to make creatively with code, and to encourage their audience to explore, interact, and question.
IMG_3103.MP4

I must admit… I have not been exposed to much interactive or computational art. As I browse some of the amazing inspirational art my peers are referencing in their looking outwards posts, I realize the extent of how little I know.

Regardless, in some shape or form, digital art has been a part of my life since I was a child. In fact, perhaps my biggest artistic influence could be considered digital art: Miyazaki’s animated films.

Miyazaki’s films draw deeply on the water color painting tradition in Japan, going back hundreds and thousands of years. Every cel was painted by hand, and painstakingly put together to create a flawless animation; individual pieces of art in their own right, joined together to make something new.

What I find interesting about these animated films now, as an artist, is the number of people who helped to create them. In this sense, it diverges from the traditional singular author approach to art. These animated films joined the talents of composers, painters, computer scientists, and film directors to create something none of them could have done on their own. I admire the humility that takes (to not need all the glory for oneself), and I admire the communal strength that displays.

These films demonstrate great opportunity for collaboration among artists and different fields. They show that science and art are not disparate, but rather when they come together, they create something entirely new.

If these films set any sort of precedent for the future, I hope to see animation taken more seriously as an art form (high-brow or commercial). It seems to me that the general public attitude towards animation is that of childish entertainment, but anybody with critical faculties that watches a Miyazaki film will be forced to rethink that opinion.

Music is a magnificent part of all of our lives. Wherever you go, you can hear music. But what if you could see the music, instead of listening? The Mill created an experimental installation that combined a live liquid paint show with generative art software, called Cosmograph and Bloom, led by multiple jazz band’s audio. As jazz bands played, a live painter was behind the scenes creating a color palette for the software by using different kinds of liquid media. The software would then capture this visual and generate it into visuals alongside the audio inputs from the jazz bands.

I especially admired this installation because of how it combines different types of art with technical software to produce a more unique and possibly beautiful visual. Both music and fine art can be intertwined thanks to the technical software. It also made me think about how possibly deaf people who have never heard music or any kind of sound can be given the chance to experience the beauty of music through visuals. Just like the creator, Rama Allen, states, the visuals represent the “puffy eruptions of the caterpillar from Alice in Wonderland”, which he claims was part of his inspiration.