The Shapes Project by Allan McCollum made in 2005-2006 is a project in which McCollum generates millions of unique shapes in order to mimic the breadth of the population when it hits its peak during the middle of the current century around 2050. McCollum created enough images so that every person on earth could have one. I admire this project because of the consideration it gives to every human in existence and the fact that none of the shapes are replications of each other. It is a thoughtful and interesting project. The random shapes are made using the system that he created and does not specify on. The prints can be made from different materials using Adobe Illustrator “vector” files.  The artist’s sensibilities are seen in the work from the magnitude and profundity of the project. 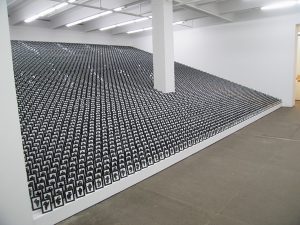