Meejin Yoon received a Bachelor of Architecture from Cornell University in 1995, a Masters of Architecture in Urban Design with Distinction from Harvard University in 1997, and a Fulbright Fellowship to Korea in 1998. Today, she is a Professor and Head of the Department of Architecture at MIT, as well as the co-founded of Höweler + Yoon Architecture LLP and MY Studio. Throughout her career, Yoon has received numerous awards and accolades and her work has been widely recognized for its innovative and interdisciplinary nature. Examples of her past projects can be found at http://mystudio.us/.

Yoon’s body of work is focused on the intersection architecture, technology, and public space. I’m impressed by the strategic way she approaches her work; she pays a lot of attention to the practicality of materials, space, and interactive potential. I also admire the publicness of her work. While it’s difficult to create work to be displayed in a gallery, I think it can be even more difficult to create work that is meant to exist in a public space and tangibly benefit the people who pass through that space. One of her works that I feel encapsulates these aspects is the “public parasol” she created in downtown Phoenix, seen below. It’s official title is shadow play, and it was specifically created to provide shade during the hottest times of the day and let sunlight in during the cooler hours. Yoon also managed to save several tons of material by being strategic with the design. 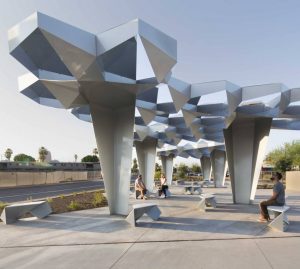 When watching Yoon’s talk, I noticed her use of visuals right away. She includes so many relevant visuals that it was very rare for the video to be focused on her face. She is also very effective at providing background information that enhances the audience’s understanding of her work. For example, I would have been a little confused with the Mobius strip dress had I not known the cultural differences between how clothing is created. I think I’ll take these ideas to heart when I present my own work in the future. If needed, I’ll try to include any sketches I did and talk about my inspiration(s).