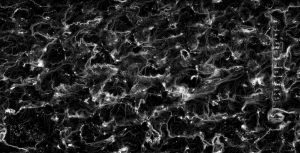 Leonardo Solaas‘s Propagaciones (2009) is a series of generative drawings that were made on commission for a book cover. Not a lot of description is provided for this work, but I find it appealing due to its visual qualities, such as the ethereal effect that the abstract forms create. The sense of randomness as well as the “imperfections” attract me to this piece. Another interesting work created by Solaas is Affine Swarms, “a generative system based on fields of drawing particles that follow the same random trajectory, but are scaled or rotated depending on their initial position.” Randomness and rotations are factors I may use in my final project.

Created by Michael Hansmeyer and Benjamin Dillenburger, Digital Grotesque II (2017) is a full-scale 3D printed grotto that was entirely designed by algorithm and materialized out of 7 tons of printed sandstone. I am interested in this work’s rich details as well as the spatial depth that its multi-layered structures create. Ultimately, its highly ornamental quality is what I find extremely beautiful in this work.

Its design development animation can be found here.

The two works both meet my interest in that they are composed of intricate designs that are simultaneously unspecific and decorative. An obvious difference between the two is that Digital Grotesque II as the final product is in a 3-dimensional form, while Propagaciones is not. The latter contains a sense of randomness, while the former does not.

These two artworks are relevant to my final project, as both random and systematic factors will be utilised in mine. The visual aspects of my project will resemble them in its intricacy and ornate details. However, mine will be interactive and in motion, unlike the two projects I have discussed.