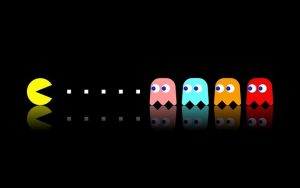 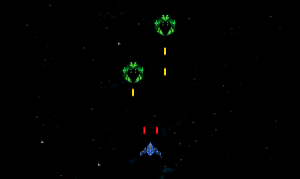 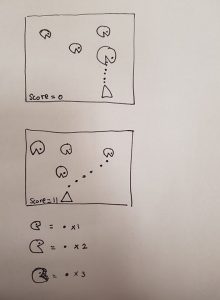 For final project  I am creating a shooting game. I want to combine packman game and 2D shooting game. The gamer has only two controls (mouse location on horizontal direction and key press to create the bullets or foods for packman). As we press key to create the foods(bullets) and shoot, the user has to control mouse to locate the position of ball shooting. The users have to aim at targeted packman to feed it. As we feed packman, packmans may want to disappear because they had enough food and want to leave. We have to continuously feed new comers. As we lever up, the bigger, and more starving packmans will come. They need more foods because they are hungrier than the previous packmans. Feeding them before they touch the bottom line is getting hard as more and hungrier packmans are coming to get foods. When the user fail to feed 5 packmans then the game is over.

I think key park for this game will be how we use the function of mouse press and location of mouse on the horizontal direction and I am also hoping to make the game graphically attractive by using many drawing and coloring commands.